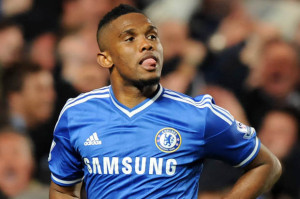 Currently in conflict with José Mourinho, the powerful Cameroonian striker Samuel Eto’o is tipped for a transfer to China, but his wage demands remain to be determined.

According to information by Goal, Guangzhou Evergrande has started negotiations to recruit the Chelsea striker. The 33-year-old scorer must leave Stamford Bridge as his lease expires this summer and Marcello Lippi, in command of the Chinese club has made the signing of the striker his priority.

The former Italy coach wants to strengthen his forward line with an attacker who has a strong international pedigree and the player is ready to migrate to China, but his wage demands of € 10 million per season remains a quack in the negotiations course.
To be continued…