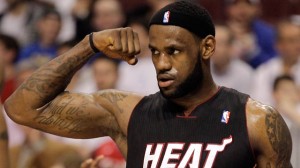 LeBron James writes over matches his legend in the NBA. Last night, the Miami Heat winger has broken a record set by Michael Jordan in the NBA playoffs.

Another statistic that gives more depth to this record is that the four-time MVP achieves this feat over 151 playoff games (179 games for Jordan).

Top 5 of players with at least 25 points, 5 rebounds and 5 assists in the playoffs!

Here is another statistic confirming that LBJ is a complete player; He is the only player to compile 4,000 points, 1,200 rebounds and 900 assists in the playoffs ! None of Oscar Robertson, Scottie Pippen, Kobe Bryant or even Kevin Garnett has accumulated such totals.