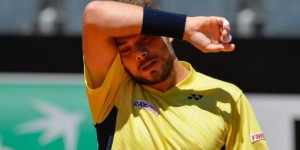 Stanislas Wawrinka takes the exit door at Roland Garros. The World No. 3 was eliminated in the first round of Roland Garros (France) by Spaniard Guillermo Garcia- Lopez 6-4 , 5-7, 6-2, 6-0.

“I cannot explain why I played badly. I felt good, motivated, ready to start this tournament,” said the recent winner of the Swiss Masters 1000 in Monaco. “On the ground, I have simply failed to do what I had to do. It was a tough match. It is a defeat that really hurts me because I thought I had everything needed to make a good Roland Garros. I feel I have played flat. I poorly negotiated exchanges. Everything was terrible. I have to admit it so,” he said disappointedly.

He will have to regain his form during the season on grass courts.