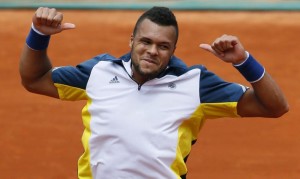 For his second game in the Parisian Grand Slam, Jo-Wilfried Tsonga won in boss. Titillated by his compatriot in the first round, the 14th player in the world has left no room for doubt facing Austrian Jurgen Melzer. He won in straight sets 6/2, 6/3, 6/4, conceding only one of his serves to the World’s 56th.

In the knockouts, seeded No. 13, will face the winner of the match between Jarkko Nieminen and Jerzy Janowicz.

Roger Federer was on the Lenglen for his second-round match. The world No. 4 defeated Argentina’s Diego Schwartzma, 6/3, 6/4, 6/4. Dimity Tursunov will be his opponent for a place in the knockouts.