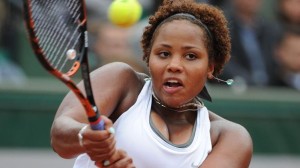 Icons disappear from women’s singles at Roland Garros. After the disappointment of the Williams sisters in the mid-day Wednesday, Alizé Cornet also took the exit door in the evening. The French seeded No. 20 has been pushed out by Taylor Townsend.

Despite the difficulties in closing, the American 205th in WTA eventually clinched her ticket to the third round of the Internationaux de France in straight sets 6/4, 4/6, 6/4.

“Townsend has greatly bothered me in the service with her left-handed kick. Tactically, she gave me everything I do not like,” said the French tennis No. 1.

Invited on the Parisian clay, Townsend (18) will clash for the ticket to the knockout Spaniard Carl Suarez Navarro. Seeded No. 14 beat Swiss Timea Bacsinszky, 7/1, 1/6, 6/4.