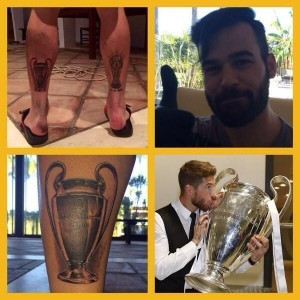 We already know the flavor of Sergio Ramos for tattoos. The Spanish defender of Real Madrid has recently expanded his collection. The former Sevilla star has tattooed on his left calf the Champions League trophy won this season against Atletico Madrid (4-1).

The opportunity to discover that Ramos has already sported the World Cup trophy he won t4 years with Spain on the right calf.

Ramos was one of the architects of the success of Real Madrid in the Champions League with his particular the 93rd minute equalizer. But he does not lose sight of the next challenge: “And now the World Cup! Go! “