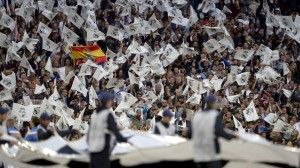 UEFA has suspended Saturday Real Madrid a match behind closed doors in the Champions League. A decision because of a banner that included a Nazi sign, deployed by Merengue supporters in the semi -finals of the European competition against Bayern Munich.

The Santiago Bernabeu will be partially closed for a game. “Sectors 120 and 122 of the stadium will be closed for the next match of the home club in European competition,” said UEFA in a statement. “Real Madrid will be forced to deploy in those areas a flag with the words ‘No to Racism’.

In their defense, the Madrid club say it was about a Madrid flag, without any Nazi symbol , reports El Mundo. In addition, the Real Madrid expressed their incomprehension on a penalty announced more than five weeks after the allegations. They should appeal for the decision, said the As newspaper.