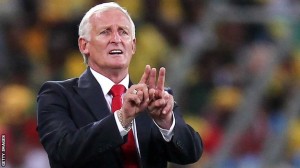 “We will not renew the contract of Gordon Igesund. A new coach is sought”. This is what has released at a press conference in Johannesburg, Danny Jordaan, the president of SAFA (South African Football Association). The technician has played against New Zealand (0-0) his last match with Bafana Bafana.

For 3 years at the helm of the team, Igesund has never achieved the objectives assigned to him. No Afcon 2012 and elimination in group stage of the 2013 Afcon held in their country, the former coach of Orlando Pirates has completely missed CHAN 2014.

He was on trial for months. Portuguese Carlos Queiroz is already announced to replace him but Danny Jordaan assured: “No decision has yet been taken. Bafana Bafana are a global brand. We must restore this brand”.