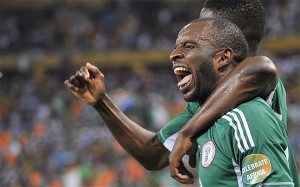 Sunday Mba will not play the World Cup with Nigeria. The information is known since yesterday when the coach of the Super Eagles made the official list of 23 players who will participate in the Brazilian competition.

Why has the author of the winning goal in the Afcon 2013 final against Burkina Faso not been selected? Stephen Keshi gave his reasons:

“His delay in training camp also contributed,” he said in remarks relayed by our colleagues of Afrik football, before continuing: “But apart from that, he has not shown that he was hungry, he wants to fight, what was expected from him. We only had two and a half weeks to prepare for the World Cup and he did not give us what we expected.”