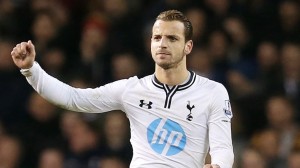 Spanish league defending champion, Atletico Madrid was also a finalist in the last Champions League. On the verge of losing Diego Costa, who will probably sign at Chelsea, club leaders would have inquired about Roberto Soldado, Tottenham (England). But unfortunately, the colchoneros supporters do not want him.

According to the Mirror, fans have set up an online campaign against a probable arrival of the Spanish striker. “UnAtletiSinSoldado” (” An Atlético without Soldado “) , is the message of this campaign.

In fact, the anger of Atletico fans is explained not only by the fact that Soldado was trained at Real Madrid, but also the transparent season that the teammate of Emmanuel Adebayor made in 2013-2014 under the Spurs jersey.