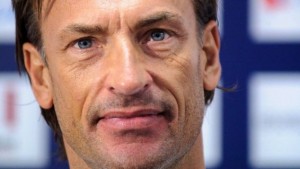 Without a club since leaving Sochaux at the end of the season, Herve Renard is not very courted at the general surprise. So he takes every opportunity to show his availability. In an interview with website Kickoff, the former coach of Zambia said he was very interested in the vacancy in South Africa.

Bafana Bafana are without coach since last Monday following the announcement of the non-renewal of the contract of technician Gordon Igesund. The SAFA (South African Football Association) has announced to be in search of a new coach. Hervé Renard sees himself in this position. “Of course I’m interested. I know very well South Africa and it will be an interesting challenge. But I ‘m sure SAFA will receive many applications so there is still time,” he tells KickOff.

For now, the 2012 African champion assures no contact with the leaders of South African football, “No discussion for the meantime. They just broke with Godron Igesund and I do not think I need to rush. We’ll see what will happen”. It is also rumored that the SAFA hopes to convince Stephen Keshi, current coach of Nigeria for the post after the World Cup.