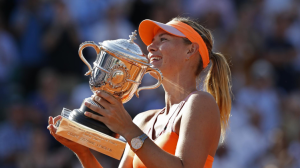 Maria Sharapova became queen of Paris on Saturday. Russian World 8th won her second title at Roland Garros over three years. After a superb match, Sharapova outmuscled Simona Halep in the final of the Internationaux de France. After 3:02 hours of play, the Russian overcame the seeded No. 4 Romanian in straight sets (6-4, 6-7 [5], 6-4).

Sharapova, 27, won her fifth Grand Slam title. The “Tsarina” has previously imposed herself in 2012 at Roland Garros, the Australian Open in 2008, the U.S. Open in 2006 and Wimbledon in 2004. She is one of the seven players, so far, who have won all major tournaments.