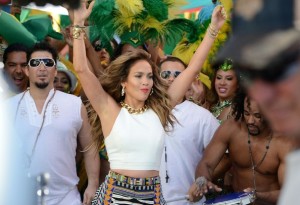 This is a real disappointment for all the fans of American star!

Jennifer Lopez gave up participating in the opening ceremony of the World Cup on Thursday in Sao Paulo, for “production reasons” as indicated by the Fifa Sunday in a statement.

Jennifer Lopez will therefore not sing in front of millions of viewers, the official song of the World 2014, “We Are One” which she recorded with rapper Pitbull, Brazilian singer Claudia Leitte and Brazilian percussion group Olodum.

It should be sung Thursday at the Corinthians Arena of Sao Paulo, before the match Brazil vs. Croatia, first game of the World Cup.

Jennifer Lopez, 44, would be the worst since her breakup with dancer Casper Smart, 27, after two and a half year relationship. She would have been caught with a transvestite!