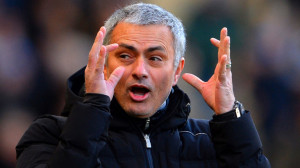 José Mourinho, considered one of the best coaches in the world, unfortunately or fortunately – it depends – never had the opportunity to take charge of a national team.

In remarks reported by the 10 Sport Tuesday, the coach of Chelsea explained, however, that he had failed to sit on the bench for England in 2007. “It was so close. No, I do not regret missing it. It was the right decision. My wife was right. I cannot wait two years for a big competition. I cannot spend two years playing against Kazakhstan and San Marino. In the end, my wife told me “no football, no matches, this is not for you.” And she was right.” said the Chelsea coach.

Chelsea boss Jose Mourinho admits it was his wife who persuaded him not to become England manager in 2007. http://t.co/34YkJBqzEv