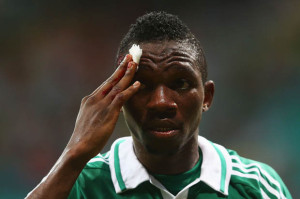 Kenneth Omeruo towards a withdrawal? Difficult to find an answer to this question right now. However, the situation of the Super Eagle worries many in the staff of Nigeria, currently in full preparation for the 2014 World Cup and at six days of the first match against Iran.

Injured on a tackle from Victor Moses, Omeruo did not participate in training last week. On Monday, the Chelsea defender has not been seen in the group session organized by the coach before the team left for Brazil. According to Kickoff, he rather enjoyed a fitted session under the eye of a physiotherapist.

The situation is even more worrying as Joseph Yobo, who replaced Omeruo during the friendly match against the United States, has not been convincing.

As for Ahmed Musa, he is back on his feet after his injury against Greece.