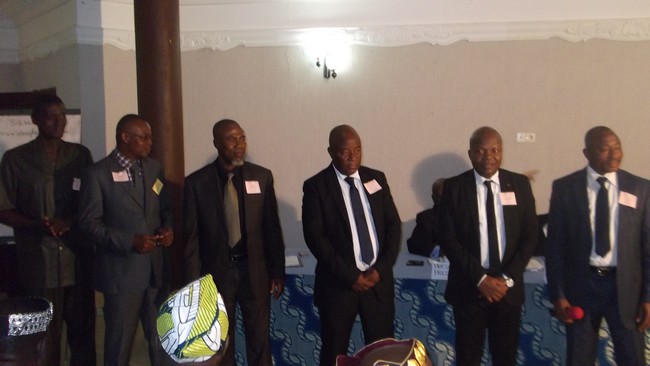 Following the example of first and second divisions clubs, as well as Ligue of soccer in Togo, ASFOSA of Lomé applied itself to an announcement of the Togolese Federation Soccer, asking the trainings to renew their staff before the congress of National Soccer Authority.

The club of second division elected its executive board on Saturday for 5 years. The outgoing president, Amouzou Tete Anthonio (in image with the microphone) was elected after having been approved by the majority. He is the only candidate from the outgoing board; he promises to invest much effort for the progress of the club. “ I am very happy today because public sportsmen of Bè still have confidence in me and elected me to manage  ASFOSA again. ASFOSA is a team which evolved in first division. At present it evolves in the second division. My ambition is to do everything so that this team finds its rank of elite and I will intensify the financial searches for the team in order to have many infrastructures. We are happy to have put a lawn so that we have good game on our playground “, he has asserted in the press at the end of the congress.

Unfortunate candidate for the elections of November 2010 which allowed Ameyi Gabriel to be the head of FTF, Amouzou Tete, the president of the ASFOSA still has no voting right. An appeal to FIFA can allow him to be candidate to the next assemblies which will take place on November 05th, 2014.