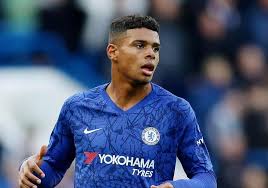 Faustino Anjorin, the England U19 international of Nigerian origin has been promoted to the first team. He would be keen to impress Chelsea manager Frank Lampard for the training ahead of the resumption of the Premier League.

Anjorin trained with the Blues first-teamers at Cobham Training Center on Thursday, June 4. That is what was told Allnigeriasoccer.com.

The 18-year-old was pictured wearing a dark peach bib during today’s workout.

Before football was suspended as a result of the coronavirus outbreak, Anjorin worked with the first team. This because  midfielders Jorginho, N’Golo Kante and Mateo Kovacic were unavailable.

He was handed his Premier League debut as Chelsea ran out 4-0 winners against Everton on March 8. He entered the game during the last nineteen minutes after coming off the bench to replace Willian.

Anjorin performed excellently for The Blues youth teams before the academy season was curtailed. He was top-scoring for the U23s in the Premier League 2 with 5 goals and captained the FA Youth Cup squad.

With the Premier League confirming on Thursday, that teams will be able to make up to five substitutions. They will also and name nine substitutes on the bench for the remainder of the 2019-2020 season. It could see the Nigeria-eligible youngster earn more appearances for Chelsea.