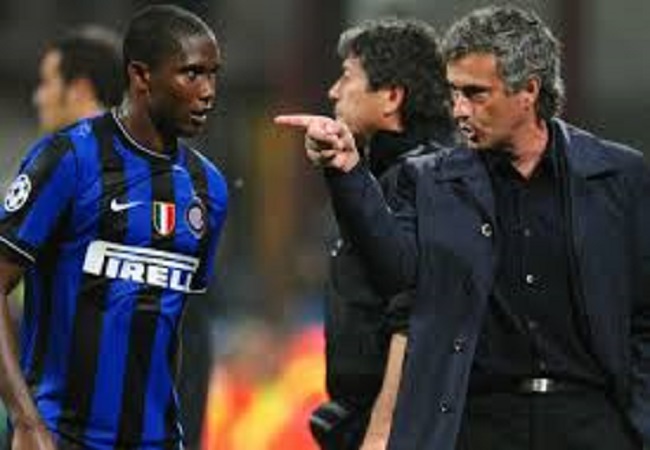 Eto’o has been comparing how he preferred Jose Mourinho’s personal touch as a manager to the way of Pep Guardiola. The Cameroon legend played under both legendary bosses. And he tells the difference for each in their approach both the game and how they treat their players.

The Cameroon scorer is one of the fewest experienced footballers to say that. He played under the two legendary bosses. Guardiola coached him at Barcelona and later Mourinho at both Inter Milan and Chelsea.

The former forward has stated before that he enjoyed working under Guardiola the coach, but not so much Guardiola the person. And he has again explained why.

“I stick to what I said, and I’m not the only person who has said it,” Eto’o told Marca.

“My experience with Pep at Barcelona was what it was, but on a personal level it wasn’t what we hoped for. Many players have said the same about him.

“As a coach, Pep prepares games like nobody else. How he coached us in 2009 was incredible, his way of seeing attacking football, control, having the ball, rondos, Pep was the best at that.

“As a player, you had the feeling that you didn’t run much, although you did, because you were enjoying it.

“They are specific techniques for those of us who love good football. For me, football is feeling like you’re in a theatre and seeing tikitaka, passing the ball. It’s not the only way to win but its special. It’s Pep’s way.”

As for Mourinho, Eto’o insists that the Portuguese is a much warmer figure than he is often portrayed as.

“He’s a person who’s upfront and when he doesn’t like something, he tells you. We both have strong temperaments and we understood each other well.

“He’s one of the best people I have found in football. People try to present him as controversial, but it’s a lie…

“Mou is a top guy. The other thing is that he only cares about the result. It’s his way of seeing football and in that sens, he is the number one. Beating him at his game is impossible, you can never beat him.

“He’s a winner and a born leader. He spoke to you with the right words. He’s great.”