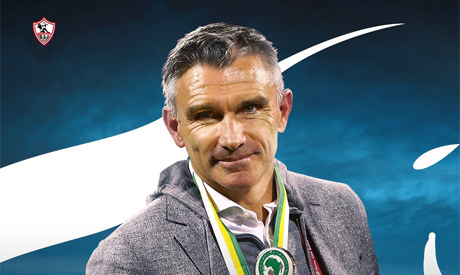 Zamalek extended the contract of French coach Patrice Carteron on Saturday. As announced by it president Mortada Mansour a week ago.

Carteron expresses his happiness to continue working as manager of the club. After having concluded his contract extension.

“I am happy and proud of continuing with Zamalek as well as being a technical manager of the Whites’ players,” he told Zamalek TV.

He took time to great fans of Cairo giants for their everyday support since his arrival in December 2019.

“Zamalek players are part of a big team with great supporters, those fans enjoyed great moments when we won two titles and we want to continue with the same strength,” he said.

He promised to win more trophies for the club.

“I promise Zamalek fans to do my best to achieve more trophies,” Carteron added.

Everything seems to be ok inside the club for the likely resumption in August of the Egyptian Premier League.