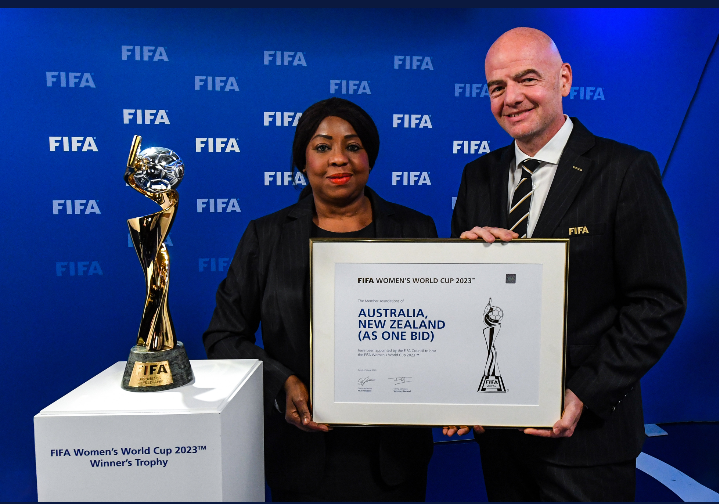 CAF president Ahmad Ahmad was among the persons who supported the joint bid from Australia and New Zealand to host the 2023 FIFA Women’s World Cup.

Australia and New Zealand won the right to host the 2023 FIFA Women’s World following vote by the FIFA Council on Thursday via videoconferencing.

Africa Top Sports monitored the votes and got the results from FIFA official website which revealed how the FIFA Council cast their votes.

The outcome of the votes was announced by FIFA president Gianni Infantino with the joint bid from Australia and New Zealand polling 22 votes to defeat Colombia who got 13 votes out of 35 votes cast.

This will also be the first the tournament will be hosted by Australia and New Zealand and across two confederations (AFC and OFC).

The 2023 FIFA Women’s World Cup  will be historical as it will be the first edition that will feature 32 teams.

FIFA decided to make major changes to the women’s world cup especially after the last edition hosted by France.

According to report by FIFA after the tournament, a combined 1.12 billion viewers tuned into official broadcast coverage of the FIFA Women’s World Cup 2019 across all platforms – a record audience for the competition.

Linear TV accounted for the majority of the global audience, with 993.5 million viewers watching at least one minute of coverage on a TV set at home, an increase of 30% on the audience for the 2015 edition held in Canada, which reached 764.0 million.

An estimated 481.5 million people accessed coverage of France 2019 on digital platforms, equivalent to 43 per cent of the total audience reach.

The digital audience, which overlaps with the linear TV audience, was up considerably on the estimated 86.0 million in 2015.

The final between the USA and the Netherlands was the most-watched FIFA Women’s World Cup match ever, with an average live audience of 82.18 million (up by 56 per cent on the 2015 final audience: 52.56 million) and reaching a total of 263.62 million unique viewers (one-minute reach), which accounted for 22.9% of the overall tournament reach.

Over the 52 matches played in nine host cities across France and broadcast in 205 territories around the world, the average live match audience was 17.27 million viewers – more than double the 8.39 million average of Canada 2015.

This can be attributed to the greater distribution of matches onhigher-profilee broadcasters in many countries, where many participating teams’ matches drew record audiences in their home territories, such as Brazil, France, Italy and the UK.

Publicis Sport & Entertainment (PSE) compiled the consolidated audience figures for the FIFA Women’s World Cup 2019 based on audience data and scheduling gathered from official television auditing agencies in markets around the world, from FIFA’s Media Rights Licensees (MRLs), and from non-captured (out-of-home and digital) audience data provided by Nielsen.