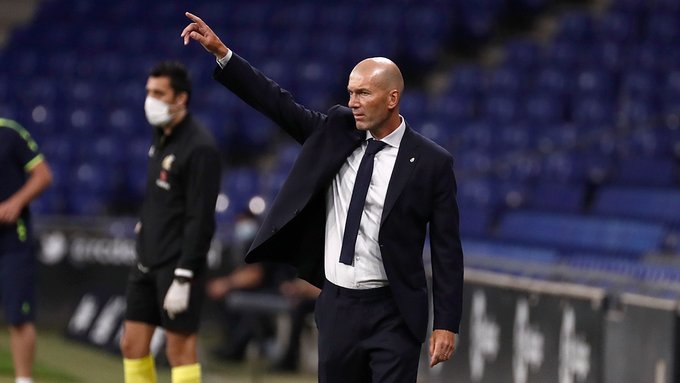 Zinedine Zidane believes the current LaLiga season title race will drag till the last day of the league before the winner can be decided.

Madrid defeated Espanyol 1-0 and extended their lead at top of the La Liga summit to two points after Barcelona played out a 2-2 draw against Celta Vigo on Saturday.

Zidane who became the Real Madrid all-time manager with the highest win spoke with journalists after the games and praised his players for their effort with a caveat that it is not yet victory.

The French tactician discussed the game, his players and his take on who will be crowned the champion at the end of the season.

“We know this will be decided at the end of the season.” I always say it, we know this league is difficult, it’s tough and hard-fought and I always think about the time we won it when I was manager in 2017 on the final day.

It’s going to be the same thing. “We’re pleased because it’s 5 wins in a row and that’s great for us, but it doesn’t change anything.

There are 6 finals still to come and now we have to rest because the next game is in no time at all”.

Commenting on the outcome of the game, the former Real Madrid midfielder relished how the solitary goal of the game was scored.

“I think the most beautiful goal is this one, because it’s the most alive and the good thing is that it’s a team move.

“It’s a ball from Marcelo to Sergio Ramos, who gets up well with his head, the control by Karim and the back heel.

“We know that Benzema is capable of coming up with something like that and that’s what he did.

It’s a very nice team goal and I’m happy for all the players. “It wasn’t an easy game against a team that defended very well with two lines of four but in the end we got the three points”

Reacting to his players performance, he admitted that they had trouble getting through in the first half and showed respect to Espanyol who made the game look difficult for his team.

“In the first half, we had a little trouble getting through. When you look at where Espanyol are in the league with the performance that they put in.

“We like playing in this league because even against the bottom side they make it difficult for you, that’s what happened today.

“They’re a quality team with good players up front and we had to hold our own.

“We know that we have to keep going, there are 6 matches left and we now have to rest well and think about the next match”.

Zidane took out time to talk about his striker Karim Benzema who has been instrumental to the squad since the La Liga restart.

“Benzema is an impressive player and he proves it in every game. He’s been here for 11 years and we all enjoy his quality.

“A player always improves and every year players get better and that’s exactly what’s happening to him.

“He’s at a very good age, up to 32-33 years old, if you look after yourself like he does, these are the best years for a footballer.

“He can still play a lot because he takes care of himself. I’m not surprised by what Karim does.

“He’s a quality player, he’s doing well and we’re enjoying his football. How long can he go on? I don’t know, he’ll decide that”

“It changes nothing. Barcelona were the ones with a 2-point advantage before and now it’s us.

That won’t change until the end. What we need to do now is try and rest up in order to go into these games with good energy levels and keep going because it’s not easy.

” I want to congratulate the players because they’re the ones fighting on the pitch”.