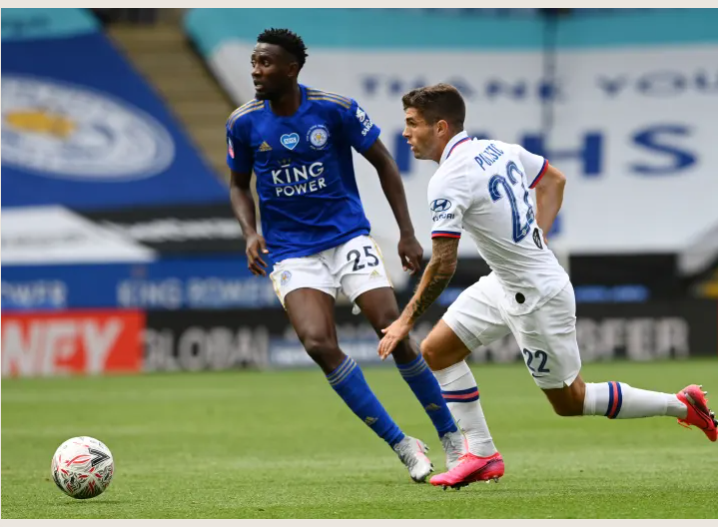 Wilfred Ndidi and his Leicester City teammates failed to progress to the semi-final of the Emirates FA Cup following a 1-0 loss to Chelsea.

Ndidi played full time for the Foxes as a 63rd minute goal from substitute Ross Barkley sent Leicester packing from the competition at the King Power Stadium.

Despite Brendan Rodgers making four changes to the team that played draw with Brighton in their last Premier League game, Ndidi retained his starting shirt.

But his compatriot Kelechi Iheanacho who started alongside Jamie Vardy was an unused sub.

A tight contest between the teams currently third and fourth in the Premier League saw Chelsea continued their dominance over Leicester City in the FA Cup.

The Foxes started on the front foot on Filbert Way with Barnes’ cross prompting Willy Caballero into an early intervention and the Argentine did enough to prevent it from falling to Pérez in the penalty area.

Ndidi came closer to breaking the deadlock for Leicester in the 13th but saw his effort thwarted .

Tielemans set-piece was well connected by Ndidi who headed the ball but Caballero saved well.

Leicester City were the better side of the game as both side headed to the dressing room failing to break the deadlock.

Barkley dealt the hosts with the breakthrough strike in the quarter of an hour as he steered in. across from Willian.

With the victory, Chelsea continued their dominance in the FA Cup over Leicester City.

The London club have progressed on each of the occasions they played against the Foxes in the FA Cup.

The last four times Chelsea defeated Leicester, they went on to winning the FA Cup.

The west London outfit posed more of a threat, too, with Tammy Abraham putting the ball in the net on 55 minutes, only to see the linesman’s flag raised – rightly – for offside after an inventive Pulisic pass.

With Hamza Choudhury and Marc Albrighton brought on for the final half an hour on Filbert Way, City briefly found more space as Chilwell galloped down the wing and saw his attempted cross clip the bar.

However, it was the visiting Blues who took the lead on 63 minutes. Willian’s cross was met by Barkley – sending a first-time effort past Schmeichel – to net his third FA Cup goal of the 2019/20