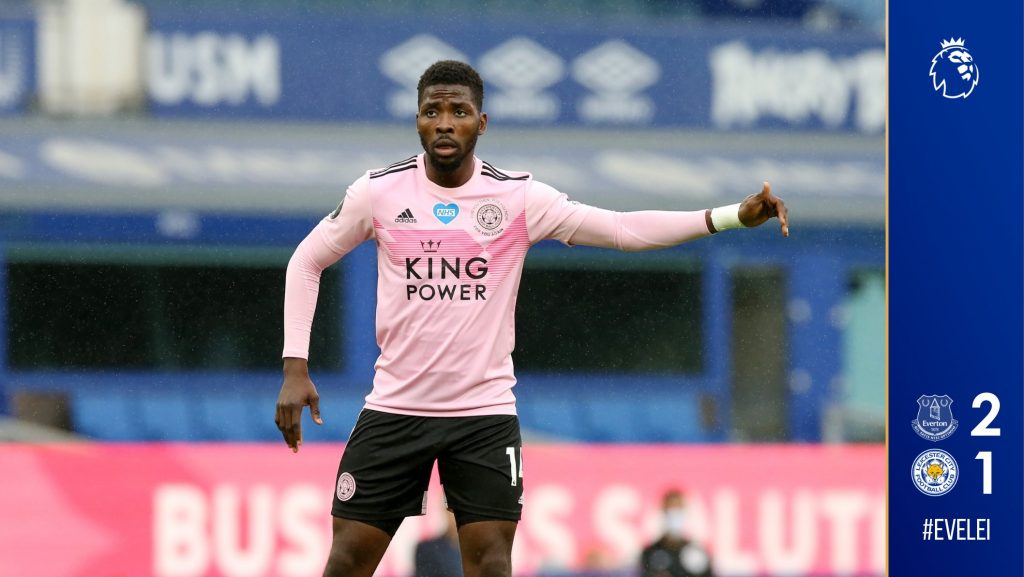 It was a busy mid-week in major leagues across Europe as effort is being intensified to complete the 2019-2020 season.

Nigerians playing in Europe leagues were to this effect involved in action for their various clubs.

Africa Top Sports monitored how Nigerian players performed for their club in Europe in the mid-week games played.

EnglandIn the Premier League midweek game, Kelechi Iheanacho came from the bench and scored for Leicester City who loss at Goodison Park to Everton.

The 23-year old was benched by Brendan Rodgers who preferred Harvey Barnes and Jamie Vardy upfront.

Leicester City found themselves trailing by two goals in the first half and when hostility returned in the second half, Iheanacho came in for Barnes.

Five minutes later, he scored to keep the Foxes within reach for a share of the spoils but Everton held on to their lead as the game ended 2-1.

His compatriot, Wilfred Ndidi retained his position as Leicester holding midfielder and played throughout the game.

He, however, picked a yellow card in the 54th minute.

Alex Iwobi was handed another start by Carlo Ancelotti at Goodison Park in Everton’s win over Leicester City.

Iwobi who has scored just one league goal for the Toffees since he joined the Merseyside club, came out for Yerry Mina in the 68th minute in a tactical substitution by Ancelotti.

Despite scoring in Manchester United FA victory last week, Odion Ighalo is yet to be handed a starting berth in the league.

Ighalo came in as a substitute in the 78th minute for Anthony Martial as United ran a 3-0 riot against Brighton at Old Trafford.

In the English Championship, Leon Balogun was solid in the back for Wigan Athletic.

Balogun who is on loan from Brighton lacked more playing time almost defeating his purpose for a loan move.

Semi Ajayi was a late substitute for West Brom who defeated Sheffield Wednesday 3-0 away and kept their return to the Premier League dream in the right way.

Ajayi joined the fray in the 88 minutes for Harper.

SpainSamuel Chukwueze made a late minute cameo for Villarreal who extended their unbeaten streak since the LaLiga restart to six.

Chukwueze who started last week game in the 2-0 win over Valencia was benched by Javi Calleja who preferred playing Javier Ontiveros.

The 21-year old made his impact felt as his assist was fluffed by hero of the game, Gerard Moreno.

Villareal have now moved to fifth on the league table as they continue to push for Champions League ticket next season.

Kenneth Omeruo picked up an injury jus five minutes of play as Leganes suffered a 3-0 defeat to Sevilla at home.

He was replaced by Chidozie Awaziem who completed the game as Leganes plunged deeper to relegation.

It was another full 90 minutes for Ramon Azeez as he helped Granada to a 2-0 away victory over Deportivo Alaves.

Italy Serie AOla Aina played 70 minutes for Torino who blew away their chances at home and loss 2-1 at home to Lazio.

Aina was drafted to Midfield by Torino manager Moreno Longo but he could so nothing much to help his club avoid a second defeat in the hands of Lazio this season.

In the Turkey 1st Lig, Abdullahi Shehu played full time for Bursaspor who won 1-0 away against Giresunpor.