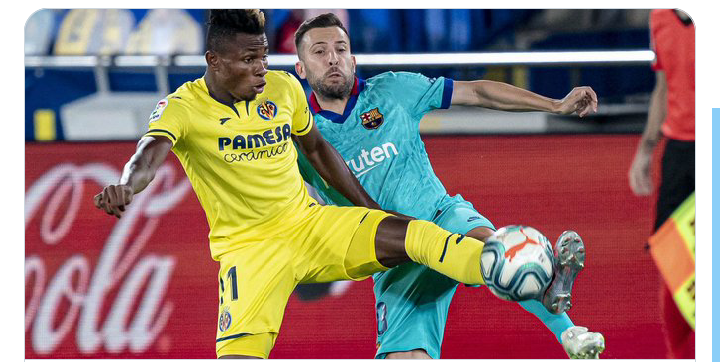 Samuel Chukwueze’s full time action for Villarreal was not enough to save them from a 4-1 defeat at home by Barcelona in Sunday La Liga game.

Chukwueze who made a late cameo in Villarreal 2-0 away win against Real Betis returned to Javi Calleja starting XI.

He was drafted to the midfield alongside  Vicente Iborra and Santi Cazorla as Paco Alcácer accompanied Gerard Moreno up front.

Having gone six games unbeaten since the La Liga restart, the Yellow Submarines were hoping to build on their impressive performance against Barca.

But is was Catalan side who went ahead with just over two minutes on the clock through an own goal by Pau Torres.

Jordi Alba had escaped down the left in the build up to the goal his low cross found Antoine Griezmann and hit Torres.

Villarreal responded immediately in the 14th minute through a rebounded goal from Gerard Moreno.

Chukwueze orchestrated the goal after he played a pass to Alcácer who sent Santi Cazorla through on goal, but his effort was parried by Marc-André Ter Stegen.

Thanks to Gerard who was quick to  the ball before anyone as he sent it into the back of the net.

Barca restored their lead in the 19th minute through Luis Suarez who roofed the bal into the top corner after a pass from Lionel Messi.

Carlos Bacca came off the bench for injured Alcacer and almost got the equalizer but Ter-Stegen did well to keep his team lead.

Just before the break, Griezmann completed his brace for the day as he dinked the ball inside the net from another Messi’s assist.

Barcelona teenage sensation, Ansu Fati completed the routing as he scored from the near post to put the contest beyond reach for Chukwueze and his teammates.

The loss put a stop to Villarreal spectacular run of results as they remain in contention for Champions League ticket next season.

Chukwueze’s club have won five games and a draw since the restart of LaLiga.

They will play Getafe with an away trip to at the Coliseum Alfonso Pérez.