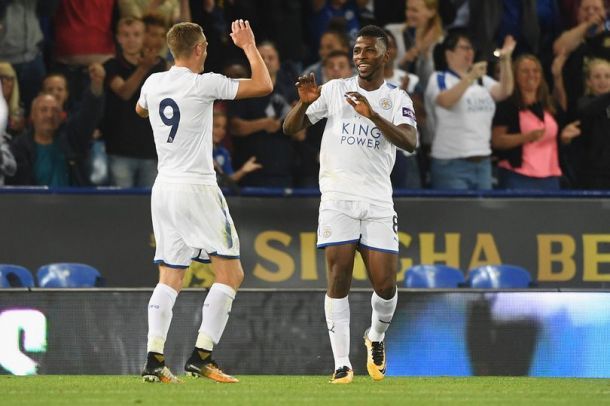 Kelechi Iheanacho has paid glowing tribute to his teammate Jamie Vardy for joining the 100 goals club in the Premier League following his brace against Crystal Palace.

Vardy scored twice in the second half for Leicester in their first league since the restart at the King Power Stadium.

The former Fleetwood striker last scored for the Foxes to make it 99 in a 4-0 victory over Aston Villa before the league was suspended due to COVID-19.

His two goals on Saturday makes it 101 league goals for the Foxes and was presented with an award for attaining the feat.

Iheanacho broke the deadlock for Leicester City at the King Power Stadium in his second consecutive goals to make it 10 this season.

The former Manchester City forward in a message on his Twitter handle celebrated the victory and congratulated Vardy for the milestone.

He wrote,“Back to winning ways. Congrats to @vardy7 on reaching the 100 club,” Iheanacho wrote on his Twitter handle.”

It marks Leicester’s first win since the resumption of the Premier League after drawing with Watford, Brighton and Hove Albion before losing to Everton.

They remain third place just two points above fourth placed Chelsea and three points ahead Manchester United who are fifth.

A slip from the Foxes could see them miss out of next season Champions League with five games to end the season.

Their next game will be against a rejuvenated Arsenal side on Tuesday at Emirates Stadium.