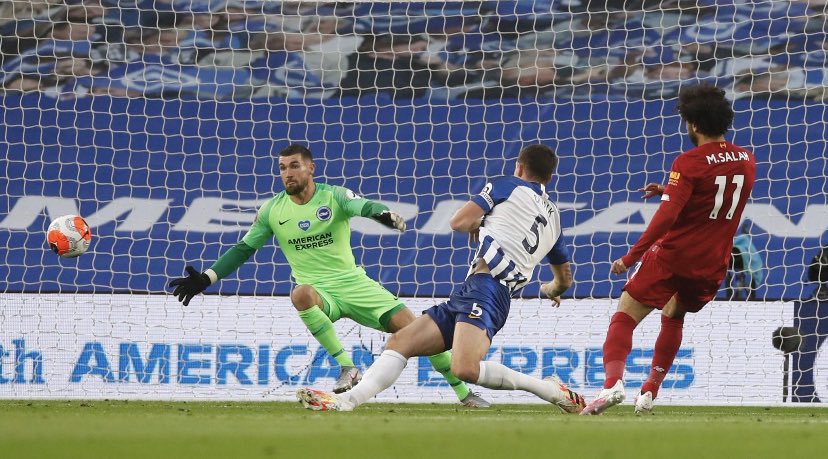 Liverpool forward Mohamed Salah revealed that his second goal against Brighton was a scripted one from their Melwood training ground.

Salah scored a brace as Liverpool defeated Brighton 3-1 at the Amex Stadium on Wednesday night in the Premier League.

The Liverpool forward having practiced with Andy Robertson during training also brought what they practised to reality.

He darted near post and headed a corner from Robertson t0 seal the victory.

The victory was a Premier League record breaking game as the Reds have now registered a 30th top-flight win in a season.

Speaking in an interview with Sky Sports, the Egyptian revealed how long he has been practicing with his Robertson.

“We trained it yesterday and two days ago – and finally Robbo gave me an assist so I’m happy for that.

Commenting on the victory against the Seagulls in their fortress, Salah said his side ability to take their chances early put the game beyond their opponents.

“I think it was a good game for fans to watch. They play really well from the back and they had a good game.

“We were lucky a bit to score in the beginning twice, [that] made the game a little bit easier to just have the confidence from the beginning. But they played a good game.

“After 2-1 they had more confidence and tried to play more football.

“They were really good and were close to scoring a second as well, so after I scored the third one it made the game calm again and we had more confidence that the game was almost over.”

Salah put Liverpool in front in the before captain, Jordan Henderson added a second goal with through an assist from the Egyptian

Brighton pulled one back through Leandro Trossard just before half-time and were hoping for an equaliser but Salah second goal of the day did the damage.

The Liverpool No.11 has now scored 73 goals with 27 assists in his 104 appearances for the Reds.