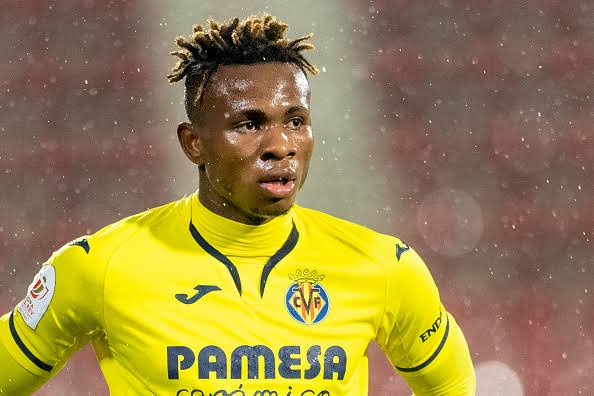 Samuel Chukwueze dream of playing in UEFA Champions League next season with Villarreal has been shattered following a 2-1 loss to Real Sociedad.

The Yellow Submarines since the restart of the La Liga in June have been getting results to keep them within the top four.

Javi Calleja set up with a 4-2-3-1 with former Academy youngster Fer Niño up top.

Read Also:Chukwueze Celebrates With Teammates After Victory Over Getafe

Due to Gerard Moreno’s suspension, Carlos Bacca’s injury and muscular pain keeping out Paco Alcácer, who was on the bench, the young forward started the game.

Chukwueze who was instrumental in Villarreal away win against  Getafe 3-1 didn’t start the game.

Two second half goals from  Willian José and Llorente in the 61 and 75 minutes respectively put Real Sociedad ahead.

It was a very even game and the chances came equally for both teams to mirror that.

Cazorla hit a great right-footed shot that brushed the far post and moments later Isak’s header provoked another feline-like, stretching save from Asenjo.

Javi Calleja put Samu Chukwueze on in the second half and Villarreal changed to play without a centre forward.

With the Nigerian attacking high, Moi Gómez, Cazorla and Ontiveros acted as shields just behind him.

Chukwueze went on to provide an assist for Santi Carzola to reduce the deficit.

All effort to share the spoils proved abortive as the visitors held on go their lead.

Sociedad became the second club to have defeated Villarreal at the Ceramica since the league restart after Barcelona.

Villarreal will now have to fight for Europa League action next season with two matches left to end the season.

Their next game will be against league leaders Real Madrid on Thursday at the Alfredo Di Stéfano stadium.