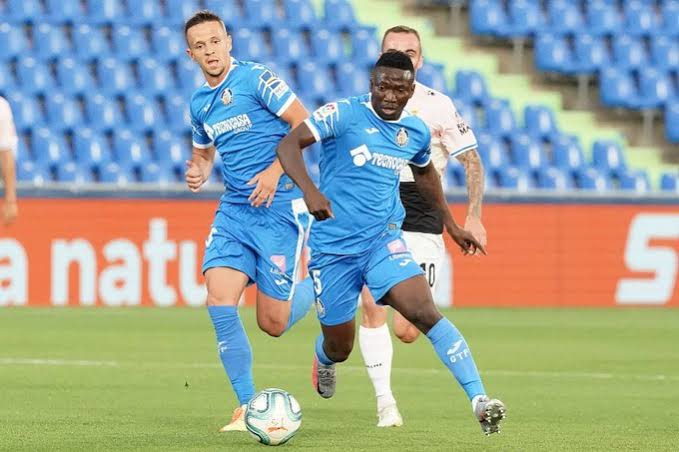 Oghenekaro Etebo could return to England next season with Stoke City after the club retained him ahead of the 2020-2021 Skybet Championship season.

Etebo who struggled to get first team jersey with the Potters is currently on loan at Getafe.

The midfielder name was not included in Stoke City list of players for summer departure.

However, the player could remain with Getafe should the La Liga club chooses to trigger their permanent deal clause.

Read Also:Liga : Oghenekaro Etebo ‘happy’ to have scored his first goal with Getafe

Etebo signed a five-year-deal with the EFL Championship side Stoke City for €7.2million (£6.35 million) from Feirense in 2018.

Stoke City in a statement on its official website confirmed the names of players that will depart the club this summer.

“Goalkeeper Adam Federici heads the list of summer departures from the bet365 Stadium after Stoke City submitted its retained list to the EFL.

“The 35-year-old shot-stopper arrived on a free transfer from AFC Bournemouth in the summer of 2018 and went on to make 14 appearances for the Club across two seasons.

“Meanwhile, experienced duo Stephen Ward and striker Mame Diouf, whose contracts were due to expire at the end of June, have both signed extensions until the end of the current season.

“Elsewhere, eight players from the U23s squad have been released, including Oliver Shenton who ends his 15-year association with the Potters having graduated from the Academy.

“Meanwhile, Ibrahima Doucoure and Reece Jones have been released.

“All first-year scholars have been retained for the 2020/21 season.

“The Club would like to thank those departing for their efforts and wish them all the best for the future.”