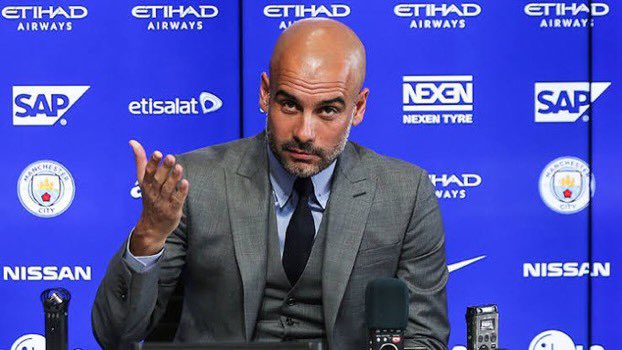 Pep Guardiola said the club owe nobody any apology because it hasn’t done anything wrong following the decision by the Court of Arbitration for Sport.

CAS on Monday rescinded the decision by UEFA to suspend Manchester City from the Champions League as well as a £30m fine.

Guardiola addressed the media ahead of Wednesday’s league game with Bournemouth as monitored by Africa Top Sports.

The former Barcelona manager Guardiola delivered a heartfelt and eloquent message reinforcing his emotional attachment to the Club.

Guardiola expressed his unflinching love for the club and his willingness to win more silverware for the Cityzens.

For the first time, the former Bayern Munich manager talked about Monday’s decision.

“We have our history. I love it. I like it and I like to work with the people I’m working with.

“When we do something wrong, I am the first to say we have to apologise or accept the punishment, but it wasn’t the case – it was not the case.

“Three independent judges decided we have done everything properly. It’s clear. So of course, I am going to defend my Club.

“And I am critical of my Club. Internally when I do not like something, I say it to my chairman.

“And my chairman is not happy with me if we finish 23 or 21 points behind Liverpool, but we discuss it internally.

Asked about how other managers and clubs might feel about the decision to overturn the two ban, Guardiola said its ledt for them.

“Being a good manager like I am, I’m not good enough without good players. No way.

“I am humble enough to accept that without my players I am nothing. Zero. That’s why I need my players.

“Have we spent more in the decade than in the past? Yes.

“But a lot of clubs invest. Manchester United and Arsenal in periods before when they won the leagues,

“But we (have) built a club in terms of the past decade to compete with the elite in the Premier League and Champions League – we needed to invest also in the incredible facilities here at the training ground.

“For that I need the club to be financially strong – like a lot of clubs – to do it.

“Of course, we make mistakes. But we can spend as much money as our chairman or owners want but always, always in the FFP rules.”