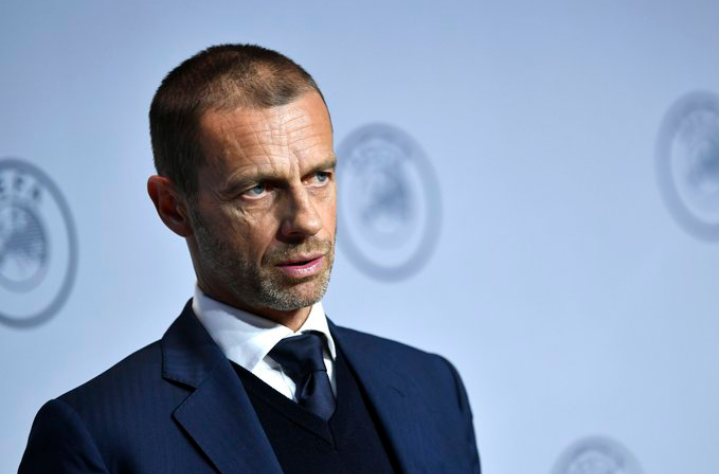 UEFA president Aleksander Ceferin says he is delighted that the Champions League and the Europa League is set to restart.

The 2019-2020 UEFA Champions League and Europa League competition will restart after it was suspended due to COVID-19 pandemic.

The second leg of the round of 16 in both competitions is expected to be completed this week.

Speaking ahead of the Europe interclubs competitions restart, UEFA president Aleksander Ceferin say they must not forget the people whose dedication has made it possible for the restart.

Ceferin while speaking on Monday said a minute of silence will be observed before any kick off.

Africa Top Sports learnt from a statement available on UEFA website that the shirt of every player will carry the words ‘Thank You’ in their chosen language.

Also, all team captain armbands will bear “No to Racism’ as a significant way to fight racism through football

He said, “I am delighted that our competitions are back, but we must not forget the people whose dedication and personal sacrifices have given us the opportunity to start playing again,” said UEFA president Aleksander Čeferin on Monday.

“When UEFA’s elite club competitions resume this week, the shirts of every player will carry the words ‘Thank You’ in their team’s chosen language – a symbol of European football’s recognition of key workers for their tireless contributions on the front lines of the COVID-19 pandemic.

“In addition to the words of gratitude printed on each team’s shirts, dedicated TV spots will be broadcast during UEFA matches, in which players representing teams competing in the men’s and women’s UEFA Champions Leagues, as well as the UEFA Europa League, express their own thanks in person.

“At this month’s round of 16 matches in the Champions League, Europa League and UEFA Youth League – as well as the Women’s Champions League quarter-finals – a minute’s silence will be observed before kick-off to honour all victims of the pandemic.

The statement further revealed that saying ‘Thank You’ will carry special meaning for players, officials and staff representing all of the teams taking part in the final stages of UEFA’s 2019/20 club competitions this month.

“In a reflection of football’s strong community ties, many clubs launched their own initiatives during local lockdowns to support hospitals, charities, schools and care homes.

“Football’s gratitude is not limited to words. This unprecedented period has taught us that football really can be an important vehicle for good, ” said Ceferin.

“In addition to the ‘Thank You’ message on their shirts, the captains taking part in UEFA club competitions in August are expected to wear ‘No to Racism’ armbands as a reminder of UEFA and European football’s united opposition to any kind of discrimination, whether in sport or wider society.

Exclusive Interview Emmanuel Adebayor : “We will get to the final”.

Exclusive Interview Emmanuel Adebayor : “We will get to the final”.