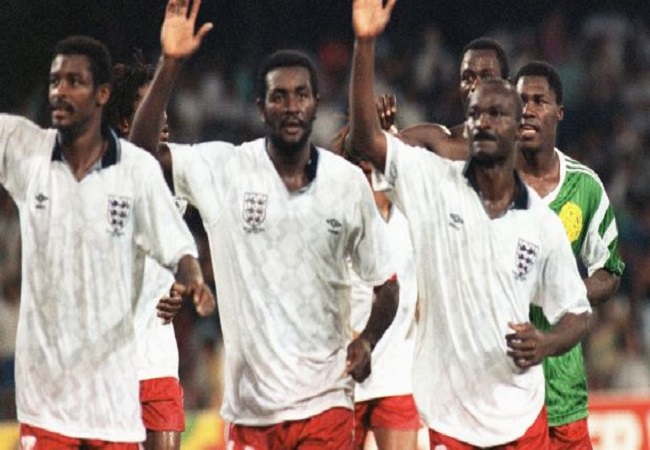 30 years ago, Paul Biya promised new built houses to members of the Cameroon national football team. The promise occurred in the framework of their participating in the 1990 Fifa World Cup in Italy. These fortunate players will finally receive houses Th President of the Republic promised.

On Thursday, the president ordered 22 modern houses to be handed to members of the squad. The team that made the country and Africa proud by reaching the last eight of the competition. The first time an African country reaching that level in a World Cup.

Though coming 30 years after the long serving leader promised the squad, beneficiaries have saluted the gesture.

Roger Milla, Cameroon’s most prominent player at the Italia ’90 World Cup, described the fulfilment of the presidential promise. For him, it is a concrete recognition of their contribution towards football development in the country.

Francois Omam-Biyick who gave his side the all-important goal in opening game against Argentina said he too is very happy.

“I am very happy and say thank you to the president of the republic. This gratification of giving houses to the 1990 players is very important.” He said.

The Indomitable Lions of Cameroon demonstrated a record-breaking run at the tournament. They defeated Argentina, Romania and Colombia at the group stage of the competition before England knocked them out in extra-time.

Delay in the presidential promise fulfilment was allegedly caused by then Cameroon Minister for Sports and Physical Education. The latter inflated the original list of 22 players to 44 and officials couldn’t handle such a huge number.

On the occasion of the 30th anniversary of the Italia ’90 tournament, Bertin Ebwelle, president of the association of former players of the national team, sent a letter to the President reminding him of the unfulfilled promise.

The letter was speedily transmitted to the presidency through the current Minister of Sports and Physical Education. The latter responded Thursday asking the General Manager of the Cameroon Real Estate Corporation to hand the keys houses to owners.

This is happening at the time when some of the Italia ’90 team members already died. As the body of the captain of Stephen Tataw at that time is still at a Yaounde mortuary awaiting burial. Tataw and two others, Benjamin Massing and Louis Paul Mfede will not personally enjoy the house.