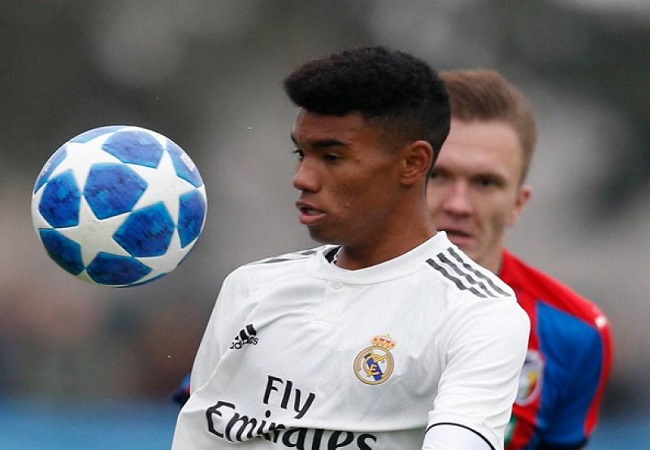 Marvin Akinlabi Park significantly participated in club last season’s UEFA Youth League winning for the first time in their history. Real Madrid’s talented Nigerian-eligible starlet is getting ready for an eventful summer after this successful season.

According to trusted Spanish media outlet Marca, the teenager has been selected amongst ten players classed as U-19. They will take a precautionary medical test ahead of Sunday morning’s training session with the first team.

Thus, the midfielder who is eligible to represent the Super Eagles through the grandfather rule, will get the chance to impress senior team manager Zinedine Zidane after an impressive campaign.

This is not the first time the youngster will get a chance to test himself against the club’s seasoned elites. As he had previously been spotted in a workout vying for the ball with first team star Vinícius Júnior.

Los Blancos and Brazil legend Roberto Carlos was reportedly in the stands at the Colovray Sports Centre, Nyon last time. And they witnessed first-hand the Nigerian lay on an assist in the club’s 3-2 victory over Benfica in the UYL showpiece.

The task will not be easy for Park. He has to face the pecking order of midfielders for the first team. Luka Modric, Casemiro, Lucas Vázquez, Federico Valverde, Isco and Dani Ceballos who are thus all above the young star.