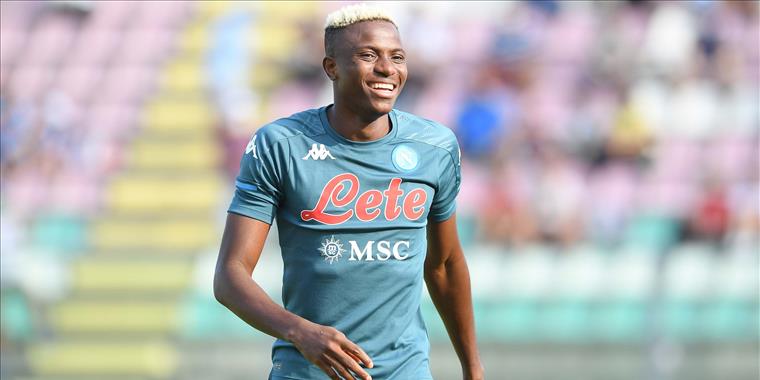 Victor Osimhen is up to a flyer in the Serie A as he scored a hat trick in his first game for Napoli following an 11-0 trouncing of L’Aquila on Friday night.

Osimhen who joined Napoli in July was handed a starting XI jersey by Genaro Gattuso.

Osimhen’s hat-trick who in his debut scores three times in less than ten minutes, inflaming enthusiasm and imagination of the fans at the Patini.

Victor Read Also:Osimhen : «I can play in any position», Declared Nigerian Internation

The Super Eagles forward with his first competitive game has already etched his name on the hearts of Napoli fans.

Speaking after the game, Napoli manager Gattuso said he was amazed by Osimhen’s debit goal.

” I’m satisfied with Victor, but let’s let him work in peace “. Rino Gattuso analyzes the first friendly match of his Napoli with an eye in particular for Osimhen’s happy debut.

“What we have seen tonight is relative, what makes me positive is the work we are doing these days, with application and dedication.

“It is a first step and we must continue”

“Osimhen is integrating well, he has quality, means, he knows what he can do and if he continues to commit himself he can have a great impact on the pitch.”

“What we see now is the result of ideas that we will have to develop over time.

” I want a team that knows how to guarantee thrust but also balance.

“We have the duty and the intention to do something different, but the blanket must be long and guarantee us solidity”