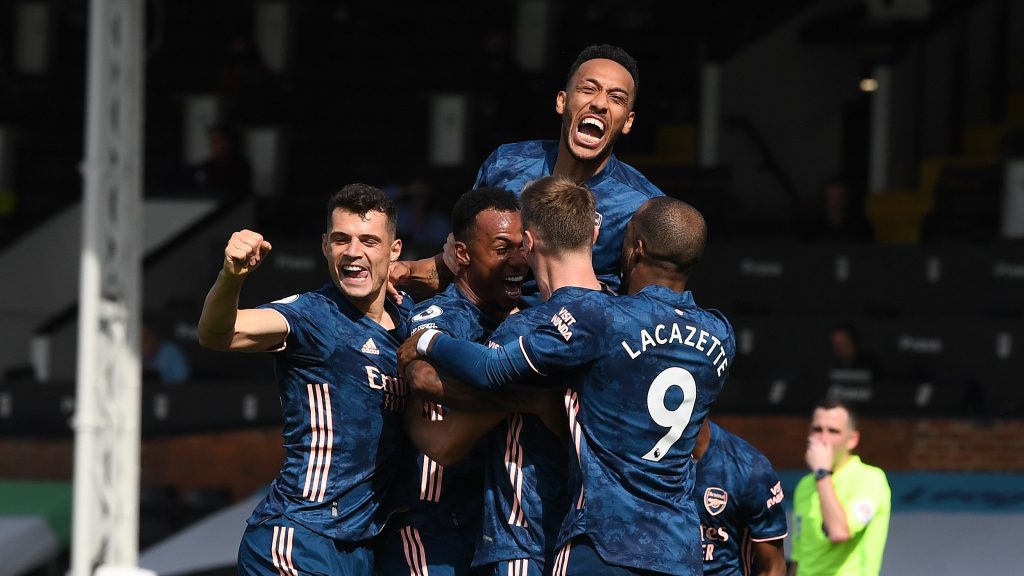 Arsenal opened their account this season in fine form with an emphatic 3-0 victory against newly promoted Fulham at the Craven Cottage.

It was the first game of the 2020/2021 Premier League and also the first London derby of the new campaign.

The Gunners buoyed from their FA Cup and Community Shield gave a good account of themselves to make a strong statement on their intention to push for a top four finish this season.

With Mikel Arteta new role as the first team manager, the team produced a stunning performance despite just adding only two players to the squad.

Arsenal scored just one goal in the first half courtesy of an 8th minute goal from Alexander Lacazette who is the first player to score in the new campaign.

Gabriel scored in the 49th minute in his   debut game before captain, Pierre-Emerick Aubameyang made it 3-0 in the 57th minute to put the game beyond reach.

Africa Top Sports brings to you some talking points from the season opener.

The Premier League continued to chart the course in the fight against racism.

Players and officials before the kick off observed the “Take The Kneel” in support of “Black Lives Matters.”

It was introduced in the concluding part of the last season in support of the extrajudicial killing of Floyd George and the incessant killing of blacks.

The Gunners game against Fulham was the fifth time they faced a newly promoted side in the opening game.

They have an impressive record against newly promoted team and that the y demonstrated once again.

The victory at Craven Cottage is Arsenal, ‘s fourth won having won the previous three and draw just one.

The last time they lost a league opener against a promoted side was in 1976-77 when they were defeated 0-1 by Bristol City at Highbury).

You can always count on Lacazette when it comes to scoring the opening goal of a new campaign.

The French forward have etched bid name in Premier League history book after his 8th minute opener against Fulham.

He become the first player to have scored the opening goal in two consecutive Premier League campaign.

He scored in the opening game of the 2027-2018 season against Leicester City.

Fulham display against Arsenal is a clear indication they could be repeating the same way they did when they returned to relegation in the 2018/2019 season.

The performance against city rival, Arsenal was nothing short of their inability to win derby games.

They have never won a London derby in their 11 top-flight derbies.

It is the longest ever run by a club in top-flight history.

Aubameyang has continued to lead by example since he was handed the armband in February.

His goal at the Wembley Stadium completed the comeback and gave Arsenal the FA Cup title against Chelsea.

He also led the Gunners to win the Community Shield against Liverpool as the curtain opener for the season.

Again, he was in his scoring form as he matched Robert Pires 15 years club record.

Aubameyang scored the third goal against Fulham to become the first player to score in a consecutive league opener.

Arsenal was not busy in the transfer window due to the financial imbroglio the COVID-19 brought.

William joined the Gunners from Chelsea while Gabriel was a last minute signing ahead of the new campaign.

Gabriel scored Arsenal’s second goal to become the 10th player to score on his Premier League debut for Arsenal in an away match.

Only Thomas Vermaelen has done that in 2009 when he score against Everton.

For Willian, he became the first player to assist two goals on his Premier League debut for Arsenal since