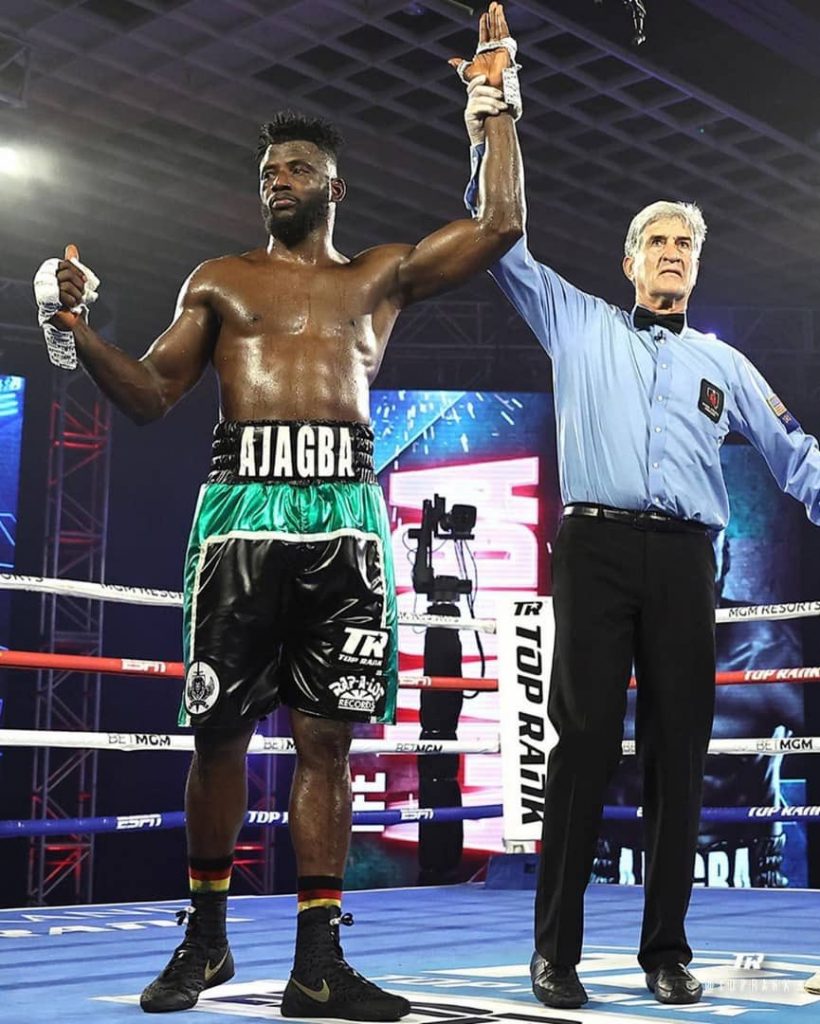 The Federal government through office of the Nigerians in Disapora Commission (NIDCOM) CEO, Honm Abike Dabiri-Erewa congratulated Ajagba for the feat.

Hon Dabiri-Erewa in a statement signed by NIDCOM Head of Media and Public Relations, Abdur-Rahman Balogun, said the victory was tensed but historical.

She said that the victory over the American boxer was not only a thing of pride to Nigerians, but to Africa as a whole.

“I congratulate you on this wonderful feat, for winning this tensed but historical fight.

“We are truly proud of you and urge you to continue to use your professional prowess to extol the virtues of Nigerian heritage.

“Your shinning beacon serves as inspiration to the youth of Nigeria.

“Your victory is also a testimony to the fact that Nigerians are great people, contributing in many ways to the development of the country and the continent as a whole,” Dabiri-Erewa stated.

She noted with satisfaction that in spite of the challenges being faced by the 26 years old Ajagba in his career, he had remained determined, focused and did not allow that to lure him into any form of criminality or depression.

This is only the second time Ajagba would be winning a fight via a 10-round unanimous decision.

While Ajagba has had it ‘easier’ in most of his other fights, he was pushed to the limits against Rice; claiming a ten-round unanimous decision over the 33-year-old American boxer.

As reported by Boxing Scene, Judge Max DeLuca had the bout 98-92, while judges Adalaide Byrd and Dave Moretti scored it 99-91 in favour of Ajagba.

This is only the second time Ajagba would be winning a fight via unanimous decision having knocked down all his previous challengers.

The last of such occasion where Ajagba was taken this deep was against previously unbeaten Ali Eren Demirezen last July at MGM Grand Garden Arena.

That fight saw 26-year old Ajagba fight through an injured elbow for much of the night but was still able to get the win.

While Ajagba has improved his record to 14 straight wins, his Saturday opponent Rice has now suffered his second straight defeat in falling to 13-6-1 (9KOs), both coming versus unbeaten opposition.

Though Ugheli-born Ajagba has extended his winning streak, the 2016 Olympian still has a lot to do if his big dreams of unseating Anthony Joshua is to be fulfilled.