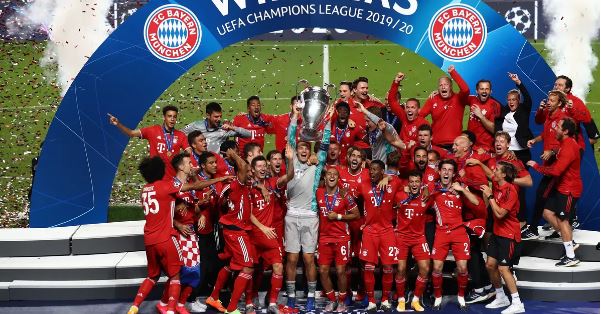 The 2019/2020 UEFA Champions League was not short of excitement down from the group stages to the finals match. Although the coronavirus pandemic initially put the competition in limbo, its return treated fans across the globe with appetizing football. The entire 2019/2020 UEFA Champions League competition had a fair share of moments that won’t be easily erased from the back of our minds.

Just like every other season, a total of 32 teams drawn across various soccer leagues in Europe kicked off the competition. Matchday 1 started in mid-September 2019, with some teams registering shocking results. Barcelona played a barren draw with BVB, Napoli beat Liverpool by two goals to nil, and PSG stunned real Madrid with three goals to nil. Chelsea shockingly lost one-nil at home to Valencia. The group stages of the UEFA Champions League competition wrapped up on matchday 6 in September 2019, with most big giants registering crucial wins that propelled them to the next stage. The likes of Inter Milan and 2018/2019 runners up Tottenham Hotspur crashed out of the competition.

The Round Of 16 (The Knockout Stage)

A total of 16 teams, as usual, progressed to the knockout stages of the 2019/2020 UEFA Champions League competition. Most big names were still in the competition, and when the draw was made on September 16th, several of these big clubs were drawn against each other. PSG vs BVB, Real Madrid vs Manchester City, Atletico vs Liverpool, and Chelsea vs Bayern Munchen were some of the highly-anticipated matches. Nearly half of these matches were already played when the Coronavirus pandemic forced the UEFA chiefs to postpone the rest of the matches indefinitely. Liverpool, Valencia, Tottenham, and BVB were already dumped out of the competition by Atletico Madrid, Atalanta, Leipzig, and PSG, respectively. When the competition returned in August 2020, Bayern eased past Chelsea as Lyon, Barcelona, and Man City dumped Juventus, Napoli, and Real Madrid, respectively.

Following the quarter-finals and semi-finals draw made on July 10, mouth-watering clashes were inevitable. Man City vs Lyon, Leipzig vs Atletico, and Atalanta vs PSG had clear favourites in Man City, Atletico, and PSG. However, it was a shocking scoreline for Man City and Atletico as they both exited the competition after the final whistle. PSG also survived the axe as it took the last-minute brilliance of their star players to rescue the sinking boat. They scored two goals in the dying minutes and that’s the story of their fortunate progress. The other match was between Bayern Munchen and Barcelona. This was the highlight of the quarter-finals, and no one could afford to miss this match. Barcelona suffered a 8-2 defeat in the hands of Bayern Munchen. It was unbelievable that a Barcelona with Messi could ever suffer such a horrible defeat. Bayern was through to the semis.

In the semi-finals, Bayern Munich faced Lyon while PSG faced Leipzig. PSG didn’t struggle to halt Leipzig’s dream of progressing to the final by thrashing them 3-0. On the other hand, Bayern Munchen struck the same scoreline against a wasteful Lyon. In the end, the road to the Champions League finals belonged to two teams- PSG from France and the German most successful club Bayern Munchen.

It’s a dream for every European club to feature in the UEFA Champions League finals. The respective revenue and associated hype make everything about it super amazing. Although the Coronavirus pandemic meant there was no electric crowd to cheer and give the teams the needed spirit, the final wasn’t frustrating. Bayern Munchen against PSG was always going to be lit. The match started with Bayern Munchen pressing a high line as it has been with their tactician Hansi Flick.

As the match progressed, PSG grew into the game and managed to threaten Bayern. Manuel Neuer had to occasionally step up to put off PSG’s attacking flame with super saves. By half-time, the scoreline was still goalless. Both sides made no immediate changes and after nearly a quarter an hour into the second half, Bayern’s Kingsley Coman struck the deadlock with a fine taken header. This was the decisive goal, and PSG rued their wasted chances. The final whistle meant Bayern were crowned the 6th UEFA Champions League trophy while PSG failed to grab their first one.

The 2019/2020 UEFA Champions League was quite exciting despite interruptions caused by the pandemic. The heat of the Coronavirus meant that games in the latter stages were played behind-closed-doors and in the world cup knockout style. Nevertheless, the competition ended with arguably the best team lifting the trophy!