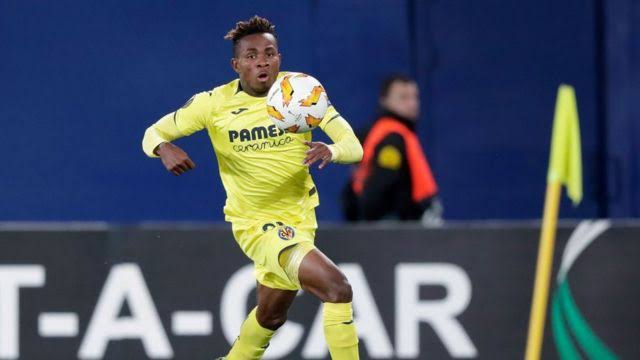 Samuel Chukwueze has been benched in Villarreal starting XI ahead of today’s La Liga game against Deportivo Alaves at the Estadio de La Ceramica.

Chukwueze was included in last week 4-0 loss to Barcelona at Camp Nou.
With the Yellow Submarines set to bounce back to winning ways.
The starting XI was released via Villarreal Twitter account ahead of the game.

Unai Emery made two changes to the squad that lost 4-0 at Camp Nou with Chukwueze and Francis Coquelin benched, Africa Top Sports gathered.
Vincent Iborra and Trigueros takes the place of Chukwueze and Coquelin.
Gomez and Trigueros will operate from the flanks while Gerrard Moreno and Paco Alcacer will lead the attack.
Raul Albiol and Pau Torres pairs in the centre while Mario Gaspar and Estupinan will are left and right back respectively.
Chukwueze is yet to find the net this season for Villarreal in his three appearances.
The winger has however made one assist.
Villarreal have won just one game and draw one with the 4-0 loss against Barca as their first defeat of the season.
A victory today could see them have seven points from a possible twelve points.
Download