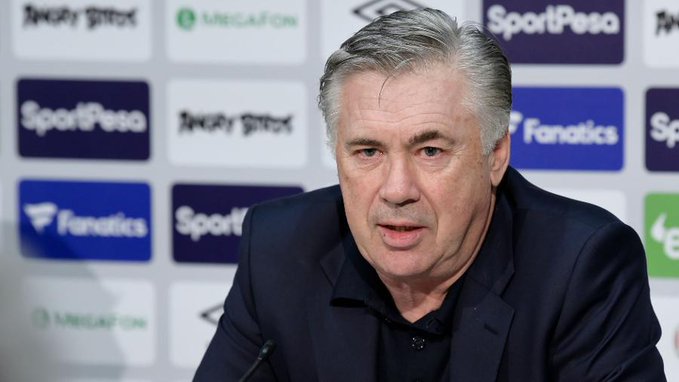 Carlo Ancelotti says his players will not be in pressure when they host Liverpool in this season first Merseyside derby on Saturday.

Everton will be looking to maintain their unbeaten streak when they host local rival Liverpool at Goodison Park in Saturday tea break fixture.

The Toffees have made a perfect start to the 2020/2021 season winning seven consecutive matches in all competition under Ancelotti.

Read Also: Manchester City Have Been Unlucky Getting The Result-Arteta

As they prepare for another test from Liverpool who lost 7-2 to Aston Villa before the international break, the stake is high for Ancelotti and his players.

The former Napoli manager spoke with evertontv.com ahead of the big game and insisted that Liverpool will put a stern performance.

The Italian believes Liverpool will not cowered but his players’ character and quality is enough to get the result.

“We have to be focused to do our best, excited and happy to play our game,” he told evertontv.

“We don’t need to have pressure, we want to play the best game we can play.

“All the games are difficult.

“This is more difficult because we are going to play against the team that won the Premier League last season.

“It is a derby, and they are a quality team.”

Ancelotti acknowledged the efforts of the new players that joined the club this summer.

James Rodriguez and others were instrumental to the Toffees’ winning run.

Ancelotti’s explained, his squad’s collective appetite for self-improvement and application on the training field yielded results under his guide.

“Every day, they are focused, with good motivation, serious,” he added.

“I think the atmosphere is very good. It doesn’t matter how many minutes the players play, they are involved.

“I see them train really well.

“I think the players who arrived did a really good job, they adapted really well.

“The new players would not be able to make the steps we have made this season alone – they have had the help of all the others that came here after holiday [following last season] with a different attitude and motivation.

“It’s important to keep the quality of the training high.

“This is only due to the attitude of the players – if we have motivation and we are focused, then the quality of the training is good.”

Ancelotti added working with his squad at USM Finch Farm is the element of his role from which he gains the most job satisfaction.

He said: “The training pitch [is what I enjoy the most].

“The biggest part of my job is to improve the Club and achieve the results. And I can reach the result by improving the players.

“I want to improve the players to give them more knowledge, but the target is to get results for the Club.”

The Italian also emphasised how the vocal support of Evertonians at Goodison and on the road is significantly missed.

“Of course, I would like to have the supporters in the stadium in this period,” he said.

“It is not possible. We are still waiting to have our fans at Goodison Park.

“Our supporters are missed in this period, because it is a good period and to celebrate a victory together would have been fantastic.”

Everton began the 1894/95 season with eight straight wins, with the final game of that run a 3-0 Merseyside derby triumph at Goodison.