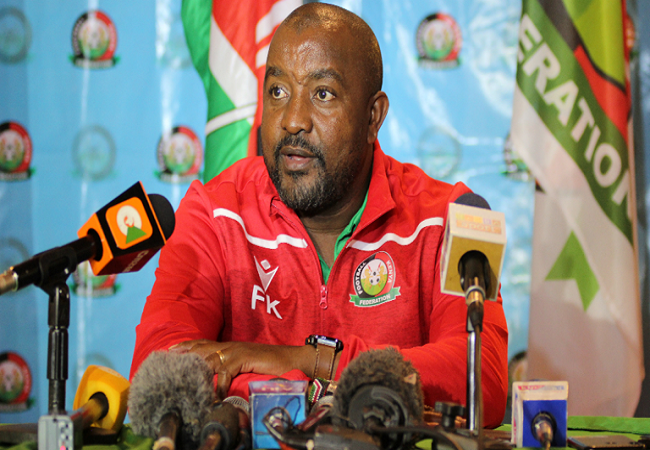 In a statement, the FKF (Football Kenyan Federation) announces the departure of its coach Francis Kimanzi. An announcement made 48 hours after the re-election of President Nick Mwendwa.

The federation indicated that the two parties separated by mutual agreement. The coach, his assistant Zedekiah Otieno and goalkeeper coach Lawrence Webo leave the Harambee stars.

“Harambee Stars head coach Francis Kimanzi and part of his backroom staff have left the national team by mutual consent.”  FKF said in a statement signed by Chief Executive Officer (CEO) and relayed by Goal.

“The Federation is immensely grateful to coach Kimanzi and his departing members of staff that include assistant coach Zedekiah Otieno and goalkeeper trainer Lawrence Webo for their exemplary work, dedication and unrivalled professionalism, which has strengthened Kenya’s chances of qualifying for the AFCON 2022 final tournament.”

Football Kenya Federation (FKF) has settled for Jacob ‘Ghost’ Mulee as the new coach for Harambee Stars hours after they parted ways with Francis Kimanzi. The latter appointed to replace Sebastien Migne in August last year.

According to Goal, the Federation under Nick Mwendwa has already contacted Mulee. He who is set to make a grand return to the team he coached and guided to the 2004 Africa Cup of Nations finals held in Tunis, Tunisia.

Less than one month ahead of the 2022 AFCON playoffs, the FKF will announce the name of a new coach in the coming days.

Kenya will face the Comoros in a double confrontation in November. For now, after 2 gamedays of qualifciations for Cameroon, the Harambee stars records 2 points. Two draws against Egypt and Togo.