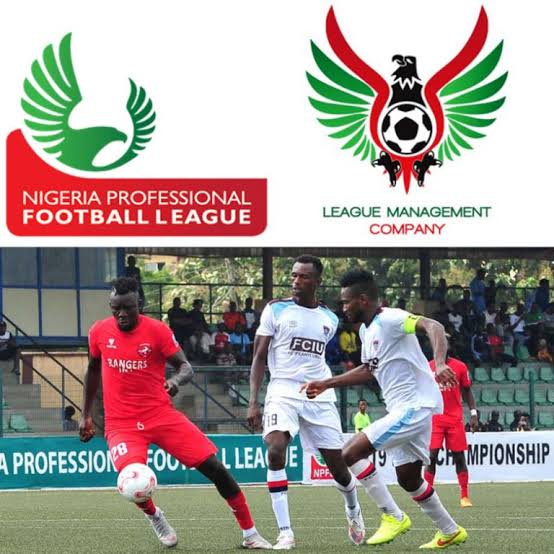 The Nigeria Football Federation (NFF) has endorsed a proposal by the League Management Company (LMC) to commence the 2020/2021season anytime from November 15 till June 2021.
NFF Executive Committee met on Tuesday via video conference to deliberate on important issues in Nigeria football.
According to communique made available to Africatopsports.com,  the NFF Executive Committee thanked the Federal Government for the lifting of ban on contact sports.
To that effect, it was agreed that the Nigeria Professional Football League (NPFL) will commence anytime from November 15 2020.

However, it is be in strict adherence to the Federal Government’s COVID19 protocols and other requirements as may be prescribed.
Also, full compliance with the club licensing regulation is a prerequisite for all participating clubs.
The communique reads ;
“Following from the lifting of ban on football activities in the country, the Executive Committee endorsed a proposal by the League Management Company to fix the calendar for the 2020/2021 Nigeria Professional Football League to commence anytime from Sunday, 15th November 2020 and end the season by June 2021, with full adherence to the Federal Government’s COVID19 protocols and other requirements as may be prescribed.
“Full compliance with the Club Licensing regulations is mandatory for Clubs willing to take part in the NPFL.
“The Executive Committee further mandated the NNL, NWFL and NLO to synchronize their calendars with that of the NPFL with each of them commencing within three weeks of the elite League.
“However, the Executive Committee made it clear that in line with the Federal Government’s directive, all football activities can commence immediately.”
Also the Executive Committee said it has not received in full the palliative funds expected from FIFA and CAF.
The body said due to that reason they have been unable to disburse the funds to the relevant beneficiaries.
“The Executive Committee received a report that as of today, 20th October 2020, the palliative Funds expected from FIFA and CAF are yet to fully be received, which is the reason for the delay in remitting the funds to the relevant beneficiaries.
“To this end, the Executive Committee mandated the General Secretary to instruct the Finance Department to continue its daily check on NFF’s banks regarding the situation of these monies, which the NFF has earmarked for disbursement to various Clubs, Leagues and some other stakeholder-groups.”
Other parts of the communique read;
“The Executive Committee expressed delight at the formal ground-breaking of the two (2) FIFA Forward 2.0 projects in Nigeria (Birnin Kebbi and Ugborodo), and underscored that the contractors must conclude the construction of the mini-stadium in each of the centres by the end of March 2021.
“While appreciating the advice of the Federal Ministry of Youth and Sports Development on the issue of the Anambra State Football Association, the Executive Committee noted that it was not only bound by Association Football protocols and the principles of fairness but also by the supremacy of the NFF Statutes.
“It noted that the constitution of a caretaker committee is very much in order, and that in line with the NFF Statutes and furtherance of the protocols and principles mentioned, the process for election of the Anambra State FA Board had to go ahead as planned.
“The Executive Committee recalled that the emergence of Senator Ifeanyi Ubah, who had written the petition to the Federal Ministry of Youth and Sports Development, as Chairman of Anambra State FA, arose under similar circumstances of an election conducted by a caretaker arrangement.
“It further reiterated that the NFF Statutes have adequate provisions for any aggrieved party to ventilate any complaints they may have.
“The Executive Committee endorsed the proposal by Bereckiah International Limited, to partner with the Nigeria Nationwide League on capacity-building and enhancement for coaches in the NLO, with the objective of improving the trainers at the grassroots level for critical impact on football development.
“The capacity-building and enhancement programmes will hold in the various zones across the country thus: North Central (Abuja); North East (Bauchi); North West (Kaduna); South East (Enugu); South South (Uyo); South West (Sagamu).
” In a bid to entrench a youth football culture and to increase mass participation of the youths in organized grassroots football, the Executive Committee approved a proposal by the Chairman of the Youth and Football Committees to set machinery in motion for the launching of an NFF National Youth Football League.”
The videoconference meeting had in attendance Amaju Melvin Pinnick (President); Seyi Akinwunmi (1st Vice President); Shehu Dikko (2nd Vice President); Ibrahim Musa Gusau (Member); Yusuf Ahmed ‘Fresh’ (Member).
Others are,Suleiman Yahaya-Kwande (Member); Felix Anyansi-Agwu (Member); Babagana Kalli (Member); Sharif Rabiu Inuwa (Member); Ganiyu Majekodunmi (Member); Emmanuel Ibah (Member); Aisha Falode (Member); Mohammed Alkali (Member); Mohammed Sanusi (Secretary).