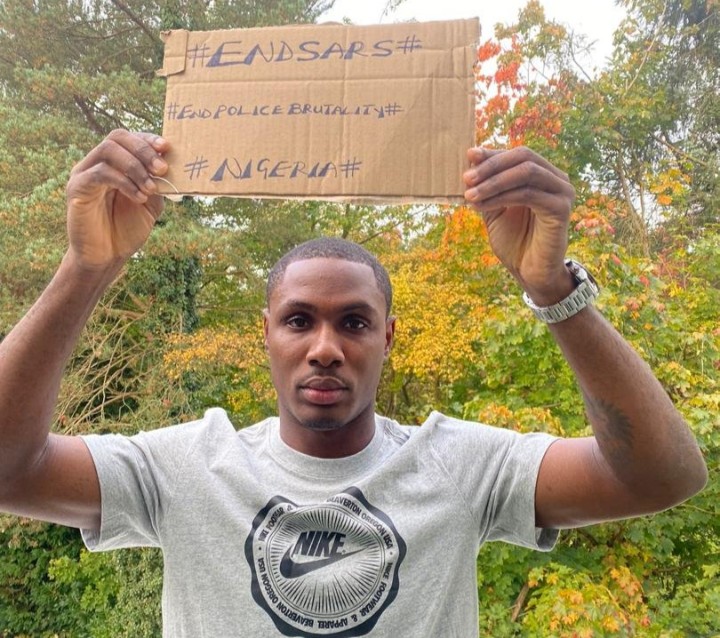 Manchester United star Odion Jude Ighalo spoke from the Parc des Princes Stadium in Paris on Tuesday about the police brutality ongoing in his homeland Nigeria.

Nigeria is going through weeks of trouble with Police brutality and blood pourings in the country that has 20 millions citizens. Pictures and videos of nigerians being tortured by the police went viral on the net and call on the football stars to say stop and protect the West African nation.

Odion Ighalo watched the entire of Manchester United‘s 2-0 win over PSG on Tuesday for their first champions league tie this season.

Just after the game, the 31-year-old registered a short video and denounced what is happening in Nigeria.

“I’m sad and I don’t know where to start from,” Ighalo said.

“I’m not the kind of guy who talks about politics – but I can’t keep quiet anymore about what is going on back home in Nigeria.

“I would say [to the] government are a shame to the world – for killing your own citizens, sending military to the streets, to kill [unarmed] protesters because they are protesting for their rights. It’s uncalled for.

“Today, 20th of October 2020, you people will be remembered in the history as the first government to send military to the city to start killing their own citizens.

“I am ashamed of this government. I am tired of you guys. I can’t take this anymore.

“I’m calling the UK government, calling all those leaders in the world to please see what is going on in Nigeria and help us – help the poor citizens.

“The government are killing their own citizens. We are calling [the world’s governments], the United Nations, to see to the matter.

“I want to tell my brothers and sisters back home to remain safe. Be indoors, please don’t come [outside]. Because this government are killers and they will keep killing if the world does not talk about this.

“God bless you all. Remain safe. One Nigeria.”