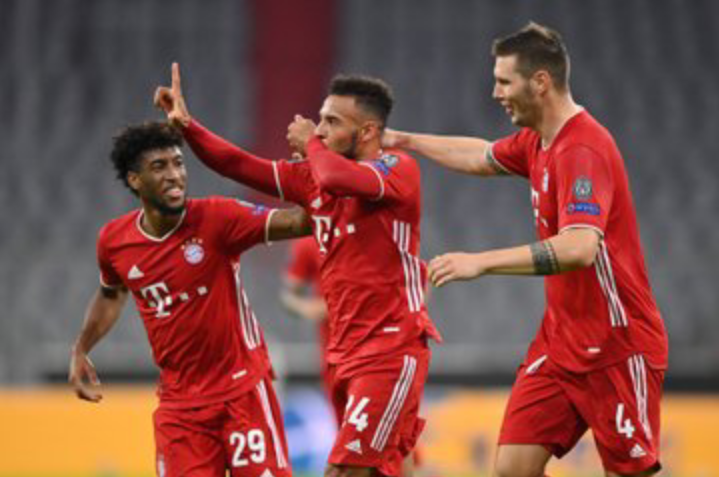 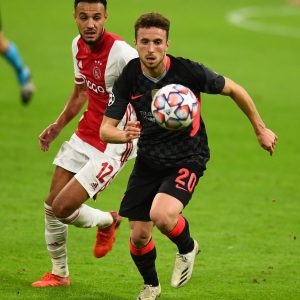 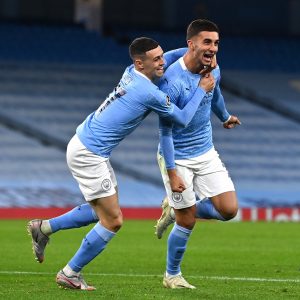 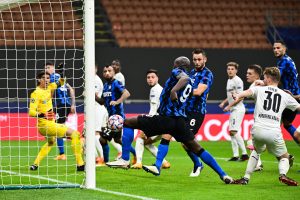 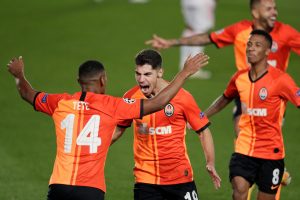 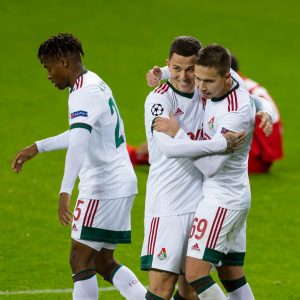 There were surprises, resounding wins and intent message in the opening games of  the 2020/2021 uefa Champions League games played on Tuesday and Wednesday across Europe.
Intrigues, stunners and records orchestrated all the with Barcelona and Bayern Munich scoring the highest goals of the opening games.
A total of 22 goals was scored on Tuesday’s opener while Wednesday game produced 26 goals with champion Bayern Munich still in contention for another stellar season.
Africatopsports.com takes a look at the round up of all games played from Group A to H on Tuesday and Wednesday. 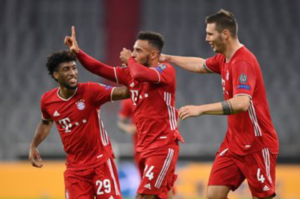 Champions Bayern Munich send a strong message of intention to successfully defend their uefa Champions League with a resounding 4-0 win against Atletico Madrid at the Allianz Arena.

A brace from Kingsley Coman and a superb strike from Leon Goretzka and Corentin Tolisso handed Diego Simeone’s men their joint heaviest loss.

In the other Group A game, Salzburg and Lokomotiv Moscow played a 2-2 draw at the Red Bull Arena.
Vitali Lisakovich first UEFA Champions League goal ensured Lokomotiv share the spoils with their host.
Eder put the visitors ahead with a fantastic header before Dominik Szoboszlai equalised for the host.
Zlatko Junuzović went on to complete the comeback after the break.
With 15 minutes left, Lisakovich nodded in the equalizer and earn a share of the spoils.

Shakhtar Donetsk shattered Real Madrid hope of returning back to winning ways at the Estadio Di Stefano.
Despite missing seven of their first team players who tested positive to COVID-19 Shakhtar stunned the Los Blancos with a 3-2 win.
Real Madrid let in three goals in the first half for the first time in a UEFA Champions League.
Tete gave the visitors a superb lead in the 29th minute before Raphaël Varane’s own goal made it 2-0 before Manor Solomon extended.
Madrid efforts to overturn the result could only need with two goals with Luka Modrić and Vinícius Júnior’s goals all they could muster.
Romelu Lukaku brace helped Inter Milan to avoid a defeat at home against Bayer Monchengladbach.
The Belgian scored his ninth consecutive European goal for the Nerazzurri.

Lukaku gave Inter the lead but they could barely finish celebrating their goal when Monchengladbach levelled through Ramy Bensebaini after Arturo Vidal fouled Marcus Thuram inside the box.

With six minutes left  Jonas Hofmann put the visitors in front and were almost running away with the points when Lukaku scores in the 90th minute.

The goal was Lukaku’s 40 for Inter Milan in 59 appearances. 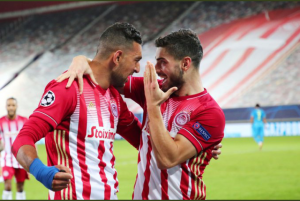 A game that was heading to stalemate finally ended in favour of the home team who were a good side to watch in the second half.

Giorgos Masourasbhad thought he has broke the deadlock but  his goal was ruled out for offside then Darío Benedette effort was  denied by Joséws.

But it was Hassan who stole the show as he rose unmarked to head in Mathieu Valbuena’s cross.

Pep Guardiola’s Cityzens fought back from a goal down in their quest for a Champions League trophy with a 3-1 win against FC Poro.

Porto raced forward with Luis Diaz scoring with a stunning solo effort to give the Portuguese giants the lead.
Sergio Aguero immediately levelled from the spot after Pepe was adjudged to have foul Raheem Sterling inside the box.
Iikay Gundogan turned the tide scoring a beautifully curled free-kick before substitute Ferran Torres doubled the lead.

Premier League champions Liverpool returned to winning ways against Ajax at Amsterdam.
The Reds had to dig deep to get the win in a game that saw chances wasted and denied.
Sadio Mane miscues a clear cut chance before the break.
Then Fabinho saved Liverpoool from going behind as he gallantly cleared a Dusan Tadic goal-bound ball off the line.
Liverpool has Nicolas Tagliafico to thank for tucking the ball into his net as the game ended 1-0.

In the other Group game, last season rookies, Atalanta romped to a 4-0 away win against Midtjylland.

The Serie A outfit who suffered a 4-1 loss against Napoli last weekend in the Serie A bounced back to winning ways.
Goals from Duvan Zapata, Luis Muriel Gomez and debutant Aleksei Miranchuk capped impressive night for Atalanta.

Chelsea and Sevilla failed to score a single goal as both teams who are favourite to top the group played goallessly.
The Blues welcomed the Europa League champions to Stamford Bridge and they were lucky to share the spoils.
Debutants Rennes and FC Krasnodar’s also played a 1-1 draw in their first Uefa Champions League outing.
Sehr Guirassy gave the French side the lead before Cristian Ramirez scored to share the spoils at the Roazhou Park in France.

Club Brugge stunned Zenit St Petersburg 2-1 away to kick off the new campaign on winning note.
Nigerian International Emmanuel Dennis broke the deadlock for Club Brugge.
Zenit levelled thanks to an own goal from Ethan Horvath.
But Charles De Kelelaere goal sealed the victory for the Belgian side.
Lazio claimed a resounding 3-1 victory against Dortmund as Ciro Immobile orchestrated the downfall of his former club.
The forward scored just 6 minutes into the game before Marwin Hitz own goal gave the Serie A side a 2-0 lead.
Erling Braut Halland gave Dortmund the hope a possible comeback as he scored in the 71 minutes.
Immobile then provided assist for Jean Akpa-Akpro who scored to make it 3-1

Alvaro Morata fired Juventus to a perfect start as they claimed a 2-0 away win against Dynamo Kyiv.
Morata scored twice in the 46th and 84th minute to give Andrea Pirlo his first Uefa Champions League win.
At Camp Nou, Lionel Messi set a new record as the first player to score in 16 consecutive Uefa Champions League season.
The Argentine broke the deadlock for the Blaugrana as he scored from the spot in a six-goal thriller with the hosts winning 5-1 against Ferencravos.
Ansu Fati doubled the lead before the break to make it 2-0
Philippe Coutinho found his name in the scoresheet to extend the lead to 3-0.
The Catalans were reduced to 10-man after Gerard Pique was sent off for fouling Ferencravos player inside the box.
Igor Khamatin scored from the spot to give the Hungarian side the hope of a possible come back.
But Barca debutant, Pedri scored to make it 4-1 before Ousmane Dembele scored the fifth goal to cap what was already a stroll for Barcelona.

Manchester United capped their return to the Champions League with another impressive away win against Paris Saint-Germain at the Parc Des Princes in France.
Bruno Fernandes who captained the Red Devils scored from the spot before Anthony Martial own goal levelled for PSG.
Marcus Rashford scored a late goal in the 87 minutes to give Ole Gunnar Solksjaer the win.
It was the second time Rashford will be scoring against the French after boa late minute goal sent PSG packing from the competition in the 2018/2019/ season.
In Germany, last season semi-finalist RB Leipzig won 2-0 at home against Istanbul Basaksehir.
A brace from Angelino was enough to hand Leipzig a perfect start to the competition.