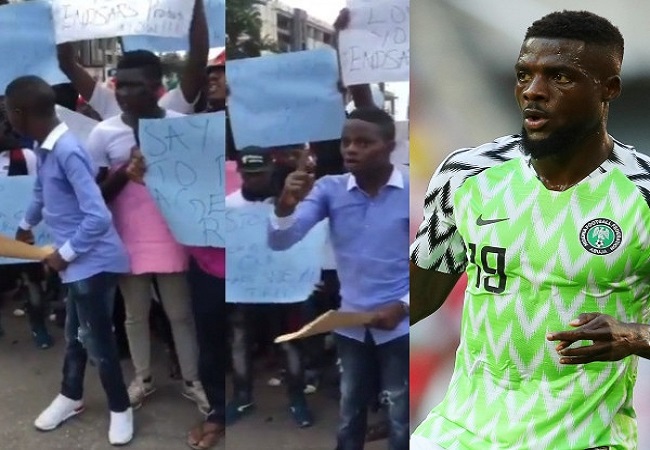 Former Nigerian midfielder, John Ogu has called on the Super Eagles to boycott upcoming AFCON qualifiers in November. An action as a way of supporting ENDSARS protest against police brutality in the country.

Speaking on World Football show on BBC World Service radio yesterday, Ogu, who is back in Lagos having left Saudi Arabian club Al-Adalah in September said. “What is the point in representing the country if this is what the politicians, the people we’re representing, can do to us? How can I go to the national team to represent my country, to represent the government and the people when I think of the lost souls of those who have been killed? Boycotting the AFCON qualifier in November would ‘make a statement’ in the protest the government.”

Following his commitment, the Nigeria Football Federation (NFF) has tagged him as an unpatriotic fellow. A top official of the NFF told The Guardian yesterday about such call coming from John Ogu to other players. For him, such idea to boycott the AFCON qualifier was uncalled for.

“Ogu has just demonstrated that he is an unpatriotic Nigerian. How will he feel seeing the flags of other nations by the time hostilities begin for the 2021 AFCON in Cameroon? Every reasonable Nigerian, including the youths is thinking of how the country can move forward. And John Ogu is thinking of how to kill our source of joy (football).

“The youths are protesting against police brutality. And the government is looking for a way to find a solution. A reasonable footballer that loves his country won’t join Ogu in this ‘nonsense’ call for boycott of the AFCON qualifier. He is matured enough to know the importance of football to Nigerians, both young and old.

“If Nigeria is going through some difficult moments, I expect the likes of John Ogu to act like Didier Drogba. Who used their national team to end the civil war in Ivory Coast some years ago. He should look back to what Drogba did at the Al-Merrikh Stadium, Sudan, in 2005 during their qualifier for Germany 2006 World Cup. Then, a civil war that began in 2002 had divided Ivory Coast. And Drogba was able to bring ceasefire following his emotional appeal to those fighting for the government and the enemies. Till today, Drogba is a true legend in Cote d’Ivoire. That is what John Ogu should emulate. And not a way of luring other patriotic players to boycott the AFCON qualifiers in November. I am sure Ogu is angry that he is no longer relevant in the team. In that case, he should work harder.” The NFF official stated.

Ogu was in Super Eagles’ squad that lost 1-2 to the Three Lions of England. It was during a friendly match at Wembley in 2018. But he was an unused sub in their matches at the World Cup in Russia.