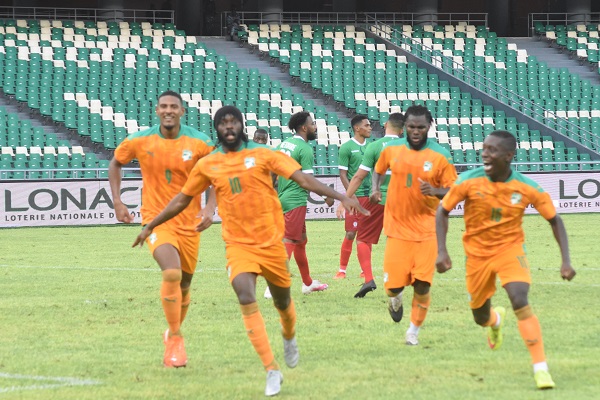 Elephants of Ivory Coast secured a second victory in Thursday’s Africa Nations Cup qualifiers with a 2-1 victory over the Bare aof Madagascar at the Enimpe-Anyama Stadium.

The Ivorian headed into the Group K Matchday 3 with the intention of toppling a high flying Madagascar side.

The game indeed proved to be a tough one for both teams as they failed to score in the first half.

The game was brought into life in the 46th minute as Yao Kouassi Gervinho broke the deadlock to become the first Ivorian player to score at the new Olympic stadium which was inaugurated on October 3rd.

Sebastian Haller then doubled the host lead in the 55th minute.

Paulin Voavy scored Madagascar consolation goal in the 59th minute and all effort to snatch a draw failed to materialise.

Ivory Coast now top the group with six points with with four goal difference with Madagascar who are second.

However,  it was not without a sacrifice as Kodjia was injured in the 22nd minute and was stretctered out.

The player could be doubtful for the return leg on Tuesday November 17 as the Ivorian travel to Madagascar.