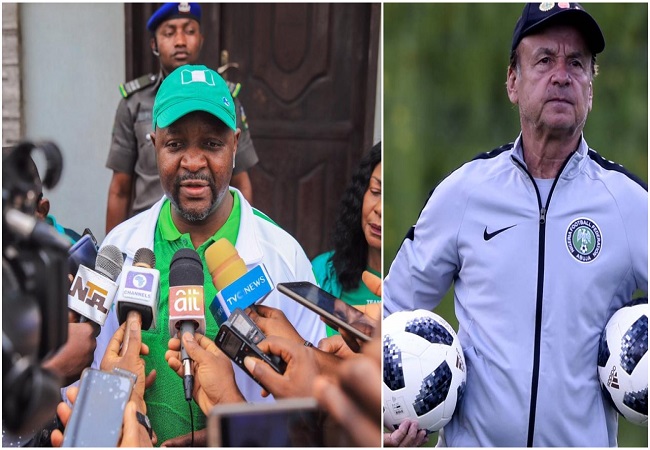 Nigeria and Sierra Leone double-header in the 2021 AFCON qualifiers ended in draws.  4-4 was the first draw on 14 November in Nigeria. Then followed the away game ending in goaless draw on 17 November.

The Super Eagles failed to redeem their image. And Minister of Youth and Sports Development, Sunday Dare, on Wednesday, doubted the “suitability and competence” of Super Eagles Coach Gernot Rohr. And he threatened that the “needful will be done”.

Dare made this known in a tweet today. He complained about the low performance of the Eagles in the last two matches.

“The performance of the Super Eagles from their last two matches calls to question the suitability and competences of Technical Adviser, Rohr. Nigerian football deserves better. The needful will be done. Apologies to all football lovers.”

Rohr has been under fire since the Eagles’ disappointing outings at the Samuel Ogbemudia Stadium. And later at the Siaka Stevens Stadium with football lovers insisting that the Franco-German be sacked as the national team coach.

President of the Nigeria Football Federation, Amaju Pinnick, had said the home match was his worst result as president of the federation. And he had charged the team to make the nation proud in Freetown. But Rohr and the team were unable to deliver on Tuesday as the away match ended in a goalless draw.

With the goalless draw, the Eagles still stay top of Group L with eight points. One ahead of second-placed Benin Republic who also played a goalless draw at Lesotho. Sierra Leone are third with three points, while Lesotho sit in the bottom of the group with two points from four matches.

The Eagles will travel to Benin Republic for their match-day five fixture. Knowing a win will secure qualification for the AFCON, while Lesotho host the Leone Stars.

But pending the next match, the fate of Rohr hangs in the balance.