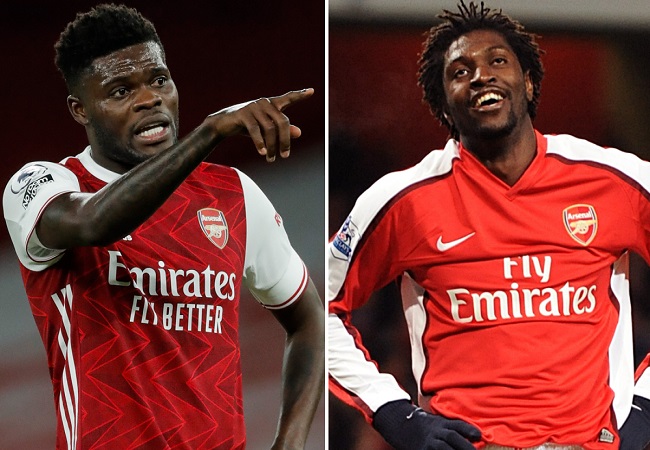 Thomas Partey was one of the most-sought after players during the last European transfer window. English giants Arsenal, Chelsea and Manchester United were reportedly keen to sign him. And it was Arsenal who won the race for the 27-year-old central midfielder’s signature. A transfer which release clause was £45 million.

And Emmanuel Adebayor, former Togo captain has disclosed that he was the one that urged Partey to join Arsenal. Adebayor, who is currently a free-agent, was on the books of Arsenal between 2006 and 2009.

“He told me that some clubs in England namely Arsenal, Chelsea, Manchester United, and others have shown interest in him. And he needs advice.” Adebayor said on Graphic.com.gh

“I advised him to go to Arsenal. Because I have had the opportunity to play there. And I think it will be good for his development.

“Arsenal is more than a club, it is a family. And I’m impressed with his performances so far in the Premier League.”

Partey made his debut for Arsenal as a substitute for Granit Xhaka in a 1-0 away defeat in the Premier League against Manchester City.

The Odumase Krobo-born player has since made five appearances across all competitions for the Gunners.

He missed Ghana’s two back-to-back 2021 AFCON qualifiers against Sudan during the recent international FIFA break. 2-0 at home and 0-1 in away game for Ghana.

Watch Adebayor in the following video.