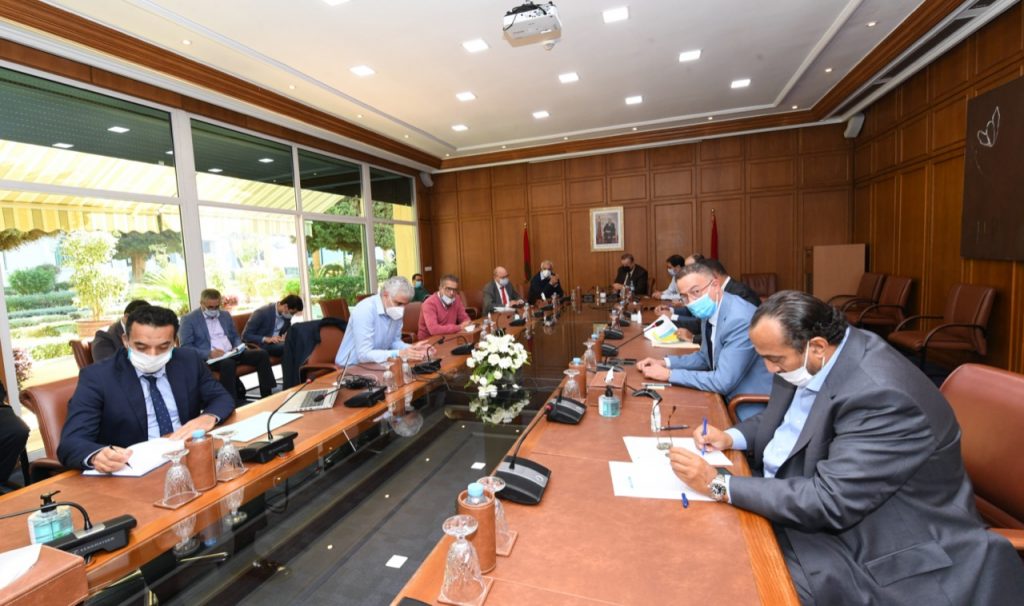 The Royal Moroccan Federation of Football (FRMF) has secured a sponsorship agreement with telecommunication company, Inwi, which will see the entity sponsoring the Bolato Pro National Championship.

FRMF Steering Committee chairman and president, Fouzi Lekjaa, announced the development during a meeting of the body recently where the starting dates for the next season were announced.

LNFP vice-president, Abdessalam Belegchour, said the national championships are set to kick-off on 4 December and run up to 18 August next year.

The finals of “Coupe du Trône” will be held simultaneously with the end of the football season.

Lekjaa explained that the main goal of next year’s season remains ensuring the official launch of the sportive season and meeting the expectations of every working unit of Moroccan football.

Belegchour also announced that the FRMF has concluded a partnership with a foreign corporation in charge of programming the D1 Spanish Championship and English Championship, for the programming of Botola Pro, in order to facilitate the smooth conduct of the national championship.

The participation of national clubs in international competitions during every season was confirmed, depending on their ranking position in the national championship and in the “Coupe du Trône” games.

LNFP general secretary, Khalid Mghifr, presented a full overview of last season’s national Youth Championship, which had to be stopped due to the Covid-19 pandemic.

It was, therefore, announced the approbation of the ranking positions of the championship up until its last game held on the 14 March 2020.

Mghifri said next season’s championship will start on 12 December and end on 18 July next year.

At the meeting the president of the FRMF announced that the General Assembly of clubs, regional leagues, the LNFP, LNFA and the FRMF will be held on 4 December 2020.

He pointed out these General Assemblies could be held via videoconference, and the FRMF will not fail to provide technical support to these instances if necessary.

With regards to coaches’ contracts, the meeting resolved that in the event of a breach of contract between the club and its coach, the coach cannot hold a technical function within another club of the same division, and during the same season.

Lekjaa said: “There will be also some adjustments regarding football infrastructure, such as natural grass coatings of the Saniet Rmel Stadium in Tetouan, the Municipal Stadium in Oued Zem, and the Ahmed Choukri stadium in Zemamra.”

The president of the FRMF further announced that there will be a change in next season’s female national championship, regarding the launch of the Botola Pro. He called on all actors to contribute heavily to the success of this newest addition.

Following the great success of the Video Assistance Referee during last season, it was decided to conduct a study to identify the possibility of using this technique during the four games of the upcoming season of D2 Botola Pro, until it is a common technique used for all games.

During this meeting, Lekjaa expressed his gratitude and pride as to the adhesion of the national football family to the cohabitation with the COVID-19 pandemic, and to the efforts made by all actors for a successful 2019/2020 football season.

“We wish a swift recovery to those affected by this pandemic, and we insist on the importance of the clubs respecting the sanitary protocol, to ensure a proper conduct of national football championships,” he said.

At the opening session of the meeting, the president of the FRMF highly saluted the actions taken by the Royal Armed Forces (FAR) under the lead of his Majesty King Mohamed VI, the Supreme Commander and Chief of Staff, regarding the protection of territorial integrity of the Kingdom, and maintaining stability in the provinces of the Southern Moroccan Sahara.

“The national football family is proud of the decisions taken by the Kingdom of Morocco, in order to put an end to the provocation pertaining within the buffer zone of El Guergarat, and obstructing the free flow of goods and Civilian persons going from Morocco to the Mauritanian borders,” he said.

Lekjaa said that every unit of the Moroccan football body, is standing toughly behind his Majesty the King Mohamed VI to defend the national cause.