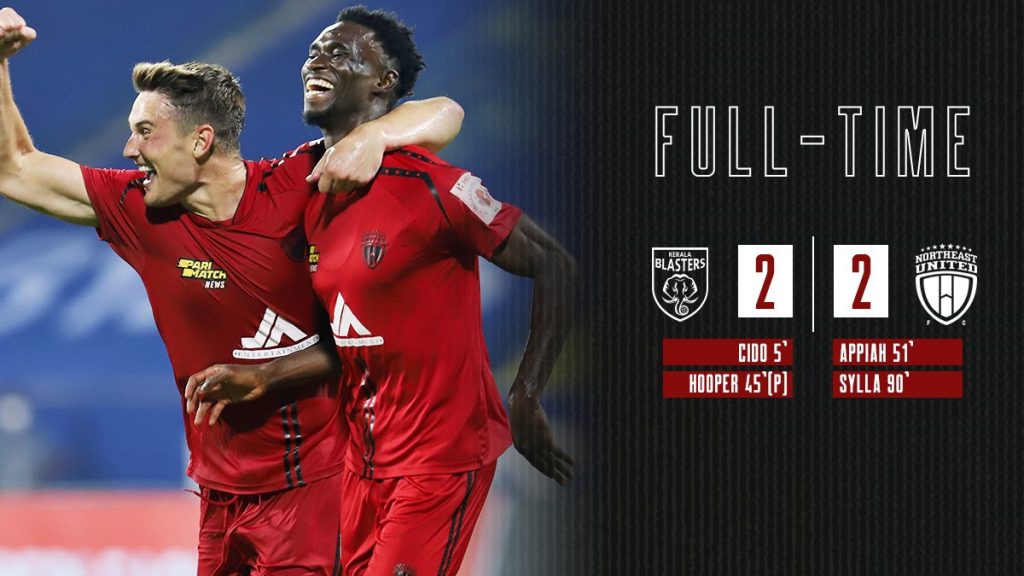 Sylla who joined NorthEast United this summer came off the bench to score a late goal to ensure his club remain top of the 2020/2021 ISL.

Thursday’s league game was NorthEast United second game of the season following their 1-0 win against Mumbai City in the league opener.

Kerala were hoping to pick their first win of the season and they got to a perfect start as Sergio Cidoncha gave them the lead just five minutes of play.

The hosts immediately almost doubled the lead in the 23rd minute but Gary Hooper fluffed a sitter as NorthEast defense was caught off guard.

Kerala kept on mounting pressure on the visitors and they were rewarded just before the end of the first half whistle.

Before the end of the first half, Gary Hooper extended the lead for the hosts heading to the break.

Rakesh Pradhan was rather harshly adjudged to have slashed Lalthathanga Khawlhring down.

Then Hooper took matters into h8s hands as he stepped in and scored from the spot.

Goals from Sergio Cidoncha (5’) and Gary Hooper (45’) gave Kerala a first-half lead. But Kwesi Appiah (51’) halved the deficit before Sylla’s late equaliser (90’) in injury time ensured a point for the Highlanders.

The Highlanders came out firing from all cylinder in the second half as they look to overturn the result.

Six minutes into the second half, Ghanaian forward Appiah reduced the deficit as he scored to give NorthEast United the hope of a possible come back.

The visitors were then awarded a penalty in the 65th minute after Lalengmawia was brought down inside the box by Kerala player.

Appian stepped forward and took it but his spot kick hit the woodwork and denied them the chance of levelling.

Sylla was then introduced into the game replacing Appiah in his second appearance.

He became a thorn in the flesh for Karela defenders as he continued to knock on the door of their goal.

In the 83rd minute, he almost levelled through a header but it went over the bar.

Then just when Kerala were thinking they are safe, Sylla struck the equalizer in the 90th minute.

He comfortably controlled a long ball from Gurjinder Kumar with his chest before powering home past Kerala keeper Albino Gomes.

In the end, the draw ensured that NorthEast remain top of the league table with four points from two games.

They also remained unbeaten and will continue their journey on the road when they travel to tackle Goa on Monday.