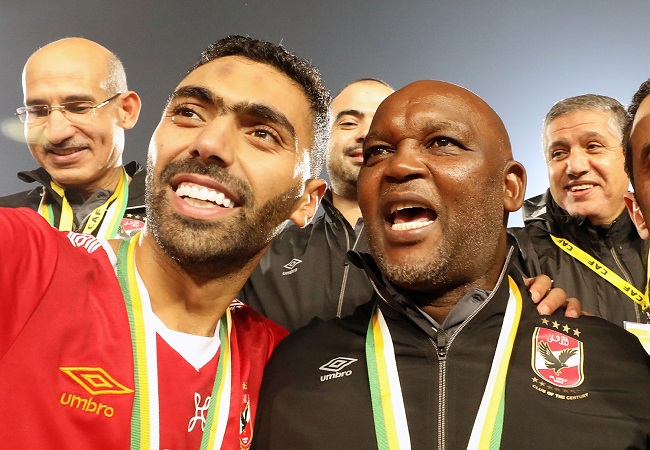 Mamelodi Sundowns issued out a message of congratulations to former coach, Pitso Mosimane. He who guided Egyptian giants Al Ahly to the Caf Champions League title on Friday night. In an all-Egyptian affair, the Red Devils beat rivals Zamalek 2-1 to triumph in the final, claiming ninth title record.

Having clinched the title during his spell at the Tshwane giants, the former Bafana mentor became only the third coach to win the coveted crown with two different club.

His efforts did not go unnoticed by his former side, who expressed pride at his remarkable achievement.

“The President of Mamelodi Sundowns, Dr Patrice Motsepe, the Board, Management, Technical team, staff, supporters and the Mamelodi Sundowns Family congratulate Coach Pitso Mosimane on leading Al Ahly SC to a 9th CAF Champions League title.” Sundowns said in a brief statement published in the club’s official website. “We are all very proud of him.”

Speaking after the Champions League final, he opened up about the pressure which comes with coaching the biggest club on the African continent.

“You have to understand the situation you’re in. I came to coach a big team in a very critical period. And that’s why I couldn’t start everything from scratch. But I had to start implementing my ideas little by little.” Mosimane told Al Ahly TV.

“I think that at least half of the Mamelodi Sundowns fans now support Al Ahly. Because of the strong relationship between both clubs.” He added.

The Caf Champions League title was the second trophy hoisted aloft by Mosimane since his arrival in Cairo, having guided the club to league glory shortly after his arrival.