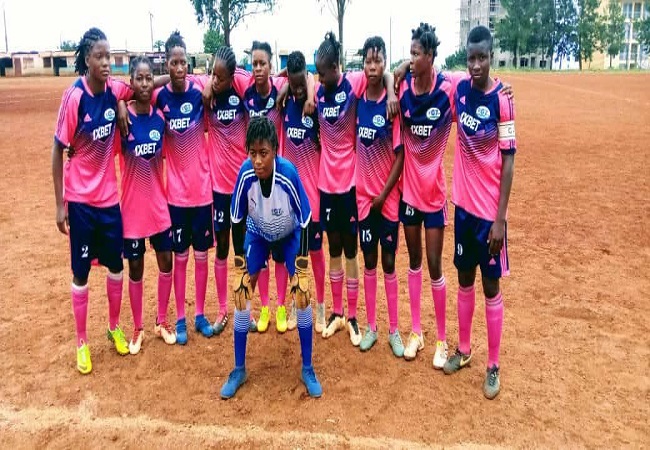 “Awaken the muscles before giving long balls.” Festus Kuaban, Head Coach of Vision Sports FC Bamenda shouted when his girls started a training session on Friday, 20 November 2020 in Yaounde. With one successful match and a draw, the Bamenda-based club is mobilising via training sessions to emerge victorious this season.

It was a recuperation session to get the girls out of their first successful match 3-0 against Eding Filles in the Guinness Super League Day 1 game. To work on resistance, the girls jogged round half of the field several times. They sweated profusely. Their jerseys were soaked in sweat. Yet, no sign of discouragement could be perceived as the girls ran diligently. What their faces can show was the anxiety and determination to win no matter what it takes.

When that exercise ended, the girls immediately jumped into developing their skills under the coordination of the club’s coach, Festus Kuaban and two other assistants. They worked on speed, attacking, dribbling skills amongst others. The goal keeper was not left out of the show. She energetically and tactfully struggled to catch the balls kicked by her team mates. This exercise was not just for the keeper. But it  was equally a platform for the goal scorers to step up their game. The atmosphere was free and with smiles on their faces, the girls slowly but surely picked something from the different exercises.

On Saturday November 21, another training session kicked off in the afternoon. This was in preparation for the match against Canon Filles on Sunday, 22 November 2020. A game that ended with a draw. It was a tough match on both ends as the duo tightened their defence and no goal was conceded. As of date, Vision Sports FC Bamenda has a clean sheet as she has not conceded any goal since the start of the competition. Meanwhile, the team has scored three goals in two matches. As for the line-up, coach Festus says he prepares his team according to his opponents. “I analyse my opponents and I know how to position my players on the field.” He stated.

To ensure victory this season the club has recruited four players. They are Avah Ortance from FAP Yaounde, Cassandra Forsuh from Abakwa FC, Glory Chinde from African Dream Soccer and another player from Abakwa girls, Foncha Nevis. Just less than two months in the club, Avah Ortance and Cassandra Forsuh are already mentioned among the best players in the team thanks to their technical skills and resistance. Shalom Makoma, team captain is also a backbone to the club due to her coordinating potentials. Vision Sports FC will face Renaissance FC of Ngoumou on the third day of the competition scheduled for 280November 2020.